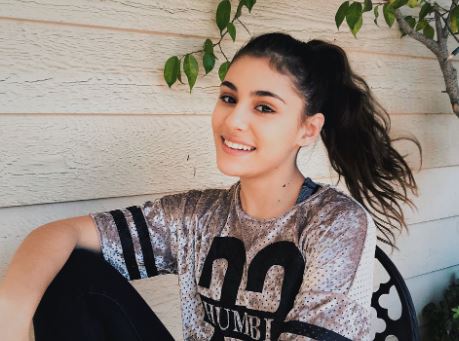 Yasmeen Fletcher is an American actress known for her appearance as Kaitlin on Disney Channel Original Series Andi Mack.

Moreover, she was also a cast in Disney Channel Original Movie Upside-Down Magic in 2020.

Yasmeen is featured in Disney’s another upcoming series Ms. Marvel which is airing on June 8.

Yasmeen Fletcher was born on March 1, 2003, in Orange County, California. Her nickname is Meena. Her family shifted to Las Vegas when she was three.

She was raised in Las Vegas, Nevada, by her parents Troy Fletcher and Maysoun Fletcher.

Her father has been her greatest inspiration. The Ms. Marvel actress with him on his birthday in January 2019, thanking him as she wrote:

Happy Birthday Dad! 🥰 Wow where do I even start? The amount of appreciation I have for everything you’ve done for me is more than you could ever possibly know. For the past year we’ve spent a lot more time together and because of that I know you’ve seen me at my all time lows and my all time highs and have helped me through both. I feel like we’ve gotten much closer and I can’t wait to see what this next year brings. I could go on and on about what an amazing person/dad you are but honestly I think I’d rather tell you in person, I love you sooooooo much padre! Happy Birthday!

She has one sibling, a younger sister named Rosa who is 16 years old.

On her sister, Rosa’s 16th birthday in September 2021, Yashmeen shared a series of photos and wished her writing:

Happy 16th annual international Rosa day everybody! Make sure you wish her the best day ever for good luck <3 Happy birthday bubs, I love you too much ♥️ (p.s. keep being the sickest person in every room)

Fletcher has Caucasian ancestry from her father and has different roots from her mother. Her mother Maycoun is a chef and has an Instagram account where she shares her recipe.

Unfortunately, she hasn’t shared further details about her education and childhood.

Yasmeen initially appeared in several uncredited roles and made her major debut in Ham on Rye in 2019. She also starred in the music video Jovan Armand: Foreign.

Fletcher then featured as Kaitlin in the two episodes of Disney’s series Andi Mack in 2019 alongside co-stars Peyton Elizabeth Lee, Garren Stitt, and Sofia Wylie, to name a few.

In 2021, she portrayed Carly in the family science fiction-horror film Let Us In.

Moreover, she starred as Chandra in the Disney movie Upside-Down Magic. In the movie, she is a manifestation of Shadow Magic who can only be seen by Reina played by Siena Agudong.

She has portrayed the role of Nakia Bahadir, Kamala Khan’s best friend. Yasmeen will be seen wearing a hijab as the character in the comics.

When a user asked her if her character Nakia will wear a hijab in the series, she replied directly saying:

Yes, I will be. The character means so much to me so I look forward to seeing the impact she makes on the younger generation.

However, some people criticized the Marvel Cinematic Universe for casting Yasmeen as Nakia Bahadir, a Turkish Muslim who wears a hijab, while she is a half-Caucasian Christian actress.

The 19-year-old actress is in her teens so, she is still young. She hasn’t revealed if she is dating or still single.

Yasmeen could be dating her boyfriend secretly so, he neither appears on her Instagram nor has been spotted in the public.

She might reveal the love of her life when she is ready.

Besides, there are several people who adore her beauty and want to have her. She has kept herself far from these and is focused on her career.

A regular cast in Disney’s movies and series, Yasmeen has already starred in three of its production and might have earned a huge paycheck.

She reportedly took thousands of dollars to feature in the upcoming series Ms. Marvel but the exact figure of the contract is not disclosed.

Fletcher’s Instagram handle is @yasmeenfletcher. She has more than 82k followers and frequently posts her personal photos.

Her sister Rosa is also a social media personality with more than 50k followers on her Instagram account @rosa.fletcher.

The actress’ parents bought a property in Mission Viejo in 2003 while she was 20 months old.

They were wrongfully told that the previous owner has killed himself in the backyard but they later learned that he had committed suicide in the garage.

Her parents even filed a lawsuit claiming that the agent lied to them while they visited the property. The Fletchers also said that they wouldn’t have bought it if they knew that the suicide took place in the garage.

The couple sued the previous widowed owner, the real state agent, the company, and pre-purchase home inspection, seeking an undetermined amount in damages for emotional distress and negligence.