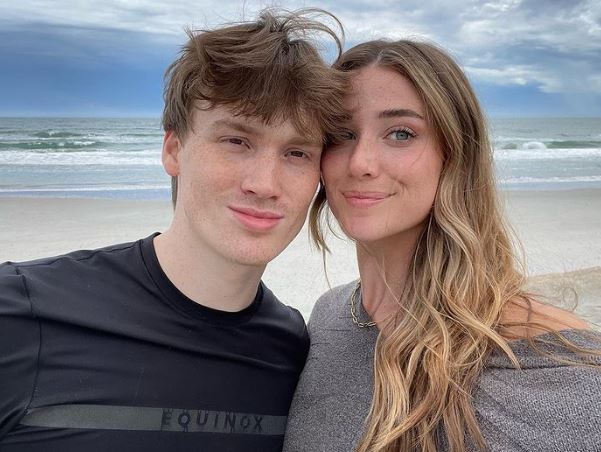 Matt Lintz, who is known for starring the older version of Henry in the American drama series The Breaking Bad, hit the tabloids recently after he was announced as one of the cast members of Marvel Studios’ Ms. Marvel.

The series also features other stars like Iman Vellani, Yasmeen Fletcher, Alysia Reiner, Laurel Marsden, etc. It is airing on Disney+ from June 8.

2022 has been a pleasing year for Matt Lintz as his most awaited show is being released and besides that, he has also found the love of his life.

On January 8, the 20-year-old actor revealed that he is dating his girlfriend through an Instagram post. Who is the lucky girl?

Who is Matt Lintz’s Girlfriend?

The 5 feet 7 inches tall actor announced that he is in a relationship with Kentucky alum Gracie Sapp.

On his Instagram @matt_lintz, he posted a photo of them and disclosed his affair among his 122k followers. Matt captioned:

Gracie also shared the same photo on her Instagram with the same caption. Moreover, she also posted another photo of the couple kissing each other.

Who is Gracie Sapp?

She is also a model who won the crown of Miss Kentucky Teen USA in 2013. Earlier. she attended Lexington Christian Academy.

Born as the middle child among 5, she was a record holder state champion swimmer and also received the Student-Athlete Award.

Matt Lintz and his girlfriend Gracie Sapp recently attended the premiere of Marvel Studios’ Moonknight on March 24 at The El Capitan Theatre.

Gracie shared the moment on her Instagram and wrote:

A (Moon)Knight to remember!!! TY @matt_lintz for allowing me to tag along 🌙🌙 (And Ty Ty Ty to @jordann_nguyen for H/MU, @tanologyau for the tan, and @graciekirn for styling me!! Love you 5ever)

Read: Who is Kyla Yesenosky? All You Need to Know about YouTuber Biagio Lazaric’s Girlfriend