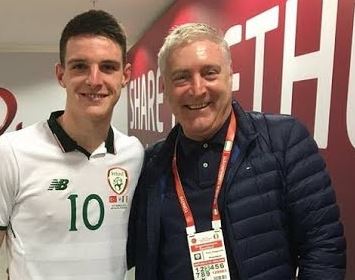 Declan Rice, an English professional footballer, was born to an Irish father and English mother in England. What’s his father’s name? Stay in the article to know everything about him.

Sean Rice is the father of Declan Rice.

His son Declan plays for the Premier League club West Ham United as a defensive midfielder or center-back. Likewise, he is also a member of the English National Team.

He was born to Irish parents Margaret and Jack who were originally from Douglas, County Cork, in Ireland.

Sean’s son appointed him as his agent in 2020 after dropping his previous agent. Since then, he has been handling all the businesses of Declan and also suggests the transfers.

As Sean being a huge fan of Chelsea and a season ticket holder at Stamford Bridge- people believed that he would convince his son to join the London club. However, that didn’t work well as Rice has no plans of going to Chelsea.

Likewise, West Ham also doesn’t want their captain to leave so, they have offered him a long-term contract until 2024.

Sean Rice’s wife is Teresa Rice. They have been married since the 1990s However, we don’t have any information about their relationship and wedding.

He has three children with his wife Teresa. They are Connor Rice and Jordan Rice, and Declan Rice.

Declan, the youngest son, is a professional football player.

Sean Rice was disappointed with his son Declan when he chose to play for England over Ireland in February 2019. Declan played for Ireland at the junior level but decided that he would represent England at the senior level.

He even informed England manager Gareth Southgate and Ireland boss Mick McCarthy about his decision.

But when his father Sean knew about it, he was not happy.

‘I’m very Irish, my mum and dad were very Irish and Declan grew up in an Irish/English environment as a lot of people from London do. And so at the end of the day he had to make a choice and I have to support my son.

I wouldn’t have thought for 100 years he’d run out in an England shirt but he’s got his reasons. It’s just a shame really — fingers crossed it all goes well.’

Declan is a professional footballer who currently plays for West Ham United and English National Team as a defensive midfielder and centre-back. He was born on 4 January 1999 (age 23) in Kingston upon Thames, England.

Rice’s parents are Sean and Teresa Rice. He comes from a mixed heritage as he has Irish roots from his father’s side and English from his mother’s side.

His paternal grandparents came from Douglas, County Cork, in Ireland and settled in England.

Being eligible to play for both England and Ireland, he first chose to represent his father’s ancestor. He played for the Ireland team at various age levels.

However, he later opted in 2019 that he would represent his mother’s country at the senior level. He has so far played 32 games and scored 2 goals.

England International is currently in a relationship with Lauren Fryer. They have been together for more than 6 years and also celebrated their 6th year anniversary in February 2022.

However, he reportedly cheated on his girlfriend with some women while on a trip to Vegas.

The news hasn’t been confirmed yet and it could be a false alarm.

Sean Rice Net worth and Salary

Sean Rice is working as his son’s agent and his job is to manage his son’s business. As a football agent, he earns £100,000 a year approximately.

Rice’s net worth is expected to be around £10 Million.

Declan’s best friend is Mason Mount who played together with his at Chelsea’s Youth Academy.