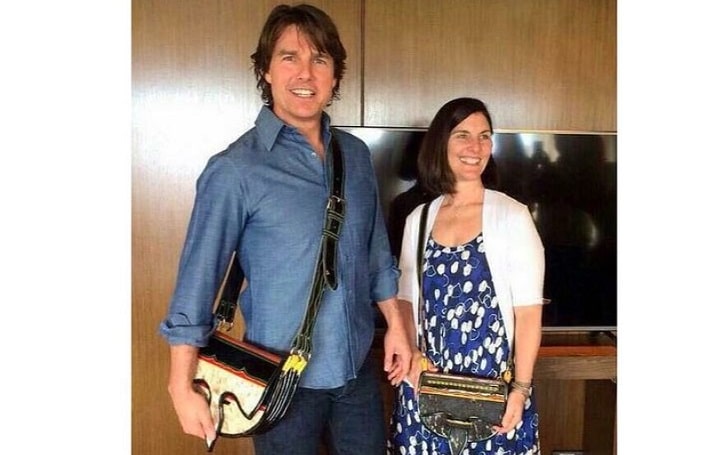 Marian Mapother is a Scientologist who is widely famous as one of the sisters of Tom Cruise. He is arguably one of the most powerful forces and charismatic actors in Hollywood.

Tom, one of the biggest movie stars, has starred in numerous films and has received various accolades throughout his career.

Marian Mapother was born in 1961, making her age 60 years now. She is the daughter of Thomas Cruise Mapother III and Mary Lee Pfeiffer.

Her father was an electrical engineer while her mother was a special education teacher. She has three siblings, two sisters, Lee Ann Mapother, and Cass Mapother, and a brother, Tom Cruise.

Mapother’s parents were both from Louisville, Kentucky, and had English, German, and Irish ancestry. She also belongs to a mixed ethnic background.

Marian’s parents did not have a good relationship and her father often mistreated Marian and her siblings. He was reported to be a “bully”, and a “coward” and used to beat them a lot.

My father] was the kind of person where, if something goes wrong, they kick you. It was a great lesson in my life—how he’d lull you in, make you feel safe and then, bang! For me, it was like, ‘There’s something wrong with this guy. Don’t trust him. Be careful around him.’

Mapother’s parents separated in 1974 and her mother Mary Lee then married Jack South in 1978. Her stepfather adopted her and her siblings.

He even supported them and was a very important part of Tom’s success. However, Jack and Mary Lee divorced in 2010.

Her stepfather Jack died of chronic disease in 2015 while her father Thomas had already died of cancer in 1984.

Sadly, her mother, Mary, passed away in February 2017 from health issues. Her memorial service was organized at the local Church of Scientology.

Where are her Siblings?

She has a very good relationship with her siblings. Her sister Lee Ann even worked for her brother Tom as his agent. She has now founded a production company, the “Cass’s Café in New Jersey.

She was her brother’s friend as he was often bullied.

His sister Cass is the director of the OT Institution, a Scientology course-related academy. Cass is married to Greg Capazorio who is the head of Criminon International, a Scientology organization.

All four siblings have bought apartments at The Skyview, Florida. The three sisters live on the third, fourth and fifth floors while their brother Tom lives on the 8th and 9th.

What Is She Doing Now? Insights On Her Career

Reportedly, her whole family is a devout Scientologist. Some report shows she works as a real estate agent with Clearwater Real Estate in Florida.

Not much is known about Mapother’s professional life as she has kept herself far from the public’s eyes.

On the other hand, her brother, Tom, is one of the most admired figures in the showbiz industry who has been working professionally since 1980.

Till now, Cruise portrayed in tons of films and television series, including The Color of Money and Rain Man. The actor gave his first part in a Franco Zeffirelli movie, Endless Love.

And Top Gun in 1985 established Cruise as an action star. The actor is widely recognized for his appearance as Ethan Hunt in the hit movie called Mission: Impossible. He is able to gain numerous prestigious awards, including three times nominations for the Oscar Awards (1990, 19971 2000).

Marian is a happily married woman, and she is also a mother of a son Cal. But Mapother has not shared her partner’s identity, and her last name became Henry after her marriage.

Due to the secretive nature of Mapother, none of the media sources have been able to find out her wedding date.

Her son, Cal is a talented guitarist in a band, WD HAN (We Don’t Have A Name). Cal and his two friends formed their respective bands.

Marian’s son, Cal, is already married, and his wife is Marjorye Henry. Marjorye is not only his life partner but also his band manager. They have been in a marital relationship since February 20, 2006.

Net Worth and Earning Sources!!!

Tom’s sister, Marian, makes her living through her job, but her profession and earnings are not covered. Exploring the web, we learned she and her siblings grew up in poverty. But now, they all live a lavish lifestyle.

Her brother, Tom Cruise, is one of the richest actors with a net worth of $570 million, making him the third richest actor worldwide.

But Celebrity Net Worth reports Cruise’s fortune is over $600 million. In his long Hollywood career, Cruise has stashed enormous wealth.

Likewise, his films have grossed over $4 billion in North America and over $10.1 billion worldwide. In addition, he has starred in the hit film, Mission: Impossible III which also stars Michelle Monaghan and Thandie Newton.

Thomas Cruise Mapother IV popular as Tom Cruise is an American famous actor and director. He gained fame as an action star and is best known for portraying Ethan Hunt in all six of the Mission: Impossible films.

Tom had a troubled childhood and often was beaten by his father. He also lived for some time in Canada where he first learned drama.

His first wife is Mimi Rogers. They married in 1987 and split after three years in 1990.

The same year, Tom and his second wife Nicole Kidman got married but the relationship didn’t last for a long time.

He then tied the knot with his third wife Katie Holmes, an actress and director, in 2006. The couple shares a daughter Suri Cruise born in 2006. They slit in 2012.

Besides, the Mission Impossible star had affairs with various women. In 2021,  he had an affair with Impossible co-star Hayley Atwell but they have broken up already.