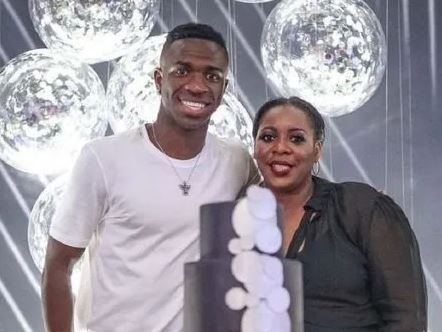 Tatiana Vinicius is the mother of Vinicius Jr, a Brazilian professional footballer who currently plays for the La Liga club Real Madrid.

She is currently married to her husband Vinicius Jose Paixao de Oliverira and has 5 children including Vinicius Jr.

Tatiana Vinicius has Brazilian nationality and is currently residing in Rio de Janeiro with her husband and children.

Mother of 5 with Husband Vinicius Sr.

They had a very poor life and lived in poverty with their five children, three sons and two daughters.

Their first son is Vinicius Junior, who is a footballer, while their firstborn daughter is Alessandra Oliveira. Her Instagram handle is @alessandra_cns where she has more than 15k followers.

Tatiana’s next son Netinho Jose Paixao de Oliverira is also a footballer. His Instagram account is @qualenetin where he is followed by more than 35k people.

Who is Vinicius Jr?

Her son Vinicius Jr was born Vinicius Jose Paixao de Oliverira Junior. He was born on 12 July 2000, in São Gonçalo, Brazil, and is 22 years old.

He holds a Brazilian nationality and has Portuguese descent.

Vini Jr. is currently signed to the Spanish club Real Madrid and plays as a winger. Besides, he is also a member of the Brazilian National Team and is anticipated to be a key player at the FIFA World Cup 2022.

He was born in a poor family and lived with his uncle Ulisses who supported him in his childhood. He trained football at the academy of Flamengo and made it into the senior team in 2017 at the age of 16.

Vinicius signed with Real Madrid in 2018 and has since then won 2 La Liga, 1 Champions League, 2 Spanish Supercops, 1 UEFA Super Cup, and 1 FIFA Club World Cup with the team.

The Brazilian youngster, who recently turned 22, is unmarried. Moreover, he hasn’t confirmed his affair with any woman.

However, Vini was reported to be dating Brazilian blogger Maria Julia Mazalli. Maria was the one who first opened up about their affair, however, Vinicius hasn’t spoken about it yet.

The two were photographed together on more than one occasion and are still rumored to be together.

Moreover, he was rumored to have something with Mexican singer Keniaos but they never confirmed their relationship. Some sources claimed that Vini met her while on a trip to Mexico.

How much is her son Vinicius Jr’s Salary?

He was born poor and lived in poverty in his childhood but with his hard work, he has succeeded and has been able to earn enough to live a luxurious life.

Vini has also provided a healthy and lavish life to his parents and siblings.

Vinicius supported Barcelona and Lionel Messi in his childhood. He used to take Barcelona while playing FIFA and other games. However, things have changed now as he has signed with rival club Real Madrid and loves the club more than anything.

The Real Madrid winger doesn’t drink alcohol. His family has always instructed him to be against alcohol.

Manchester United was the first club to try out the negotiations to sign Vini however, the talks with Flamengo didn’t go well.