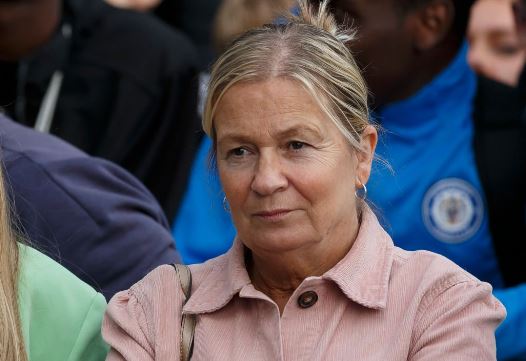 Who is Karen Grealish? What’s her relationship with the English footballer Jack Grealish?

Her son is an English footballer who plays for the Premier League club Manchester City and the England national team as an attacking midfielder.

Karen Grealish was born in the United Kingdom. She is around 55 years old and holds English and Irish nationality.

Her father was from County Dublin. She has Irish descent but hasn’t revealed details about her childhood and family.

Who is Karen Grealish’s Husband? (Mother of 5)

Karen Grealish’s husband is Kevin Grealish but other than the fact that they are a couple, there is no information about their marriage. Kevin is the agent of their son Jack Grealish.

They reportedly are together since the early 1990s and welcomed 5 children together named Jack Grealish, Keelan Daniel Grealish, Kiera Grealish, Holly Grealish, and Kevan Grealish.

Their first child Jack Grealish, born in 1995, is an English footballer. The second child Kevan Grealish was born in around 1997.

Karen’s third child Keelan, born in 2000, died of SIDS as an infant when he was 9 months old. Her two daughters Kiera and Hollie Grealish are youngest in the family.

Her husband Kevin’s father came from Gort, County Galway, while his mother is from Sneem, County Kerry.

Her eldest son Jack Grealish is an English footballer who plays as an attacking midfielder/ winger for Premier League club Manchester City and England National Team.

He was born Jack Peter Grealish on 10 September 1995 (age 26) in Birmingham, England. He joined the academy of Highgate United at a very young age and moved to Aston Villa when he turned 6.

Jack played for Notts County for a season on loan in 2013 and returned to Aston Villa.

Grealish played 185 matches for the club and scored 29 before accepting a deal to join Manchester City in 2021. He joined the club with a six-year contract and the transfer fee was reported to be £100 million making him the most expensive English player.

He also won the Premier League with the club in 2021. Moreover, he was also a member of the English team that played the final of the UEFA European Championship in 2020 which they lost to Italy.

Who is Jack Grealish’s Girlfriend?

Grealish is still unmarried but has a girlfriend Sasha Attwood. The couple has been dating for a couple of years now.

Jack and his 2-year-old partner often spend time together.

Recently, in July, they were spotted enjoying their holidays in Santorini. Moreover, the pair together attended ex-Aston Villa teammate Conor Hourihane’s wedding in Mykonos earlier in June.

The famous footballer Jack has been into many controversies and often receives criticism not being professional.

In 2015, Aston Villa manager Tim Sherwood warned him after he was pictured inhaling nitrous oxide.

“We can’t condone that behaviour. He is now in a responsible position as a professional footballer, he’s got to make sure it won’t happen again”.

In 2016, Grealish was under investigation by Aston Villa after he was reportedly partying all night at a hotel. Moreover, he allegedly violated government guidance to stay home during the COVID breakout in 2019 for which he was by the club.

Jack was banned from driving for 9 months after he was pledged guilty to two counts of careless driving. Moreover, he was fined £82,499.

He is often criticized for allegedly diving to get penalties. Former Liverpool defender Steve Nicol talked about how he easily he throws himself to the ground and said:

“Jack Grealish throws himself on the ground 50 times a game. I was actually looking at the clock today. The first time he went down was just under a minute on the clock. The next one was on three minutes! [It’s] Most embarrassing. He threw himself on the ground where the dugouts were. Just embarrassing. He is a brilliant player. He really spoils it for me when I’m watching.”

However, Grealish defended himself with the stats that he is the most fouled player in the 2020–21 Premier League season. He said that the defenders make mistakes and foul him to stop him which gives away more penalties and free kicks.