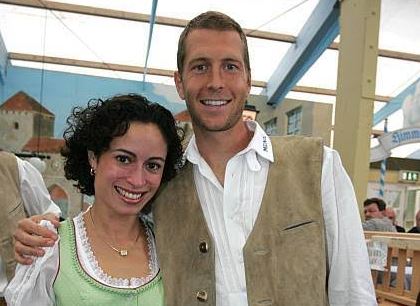 Rosalind Berhalter is the wife of the American soccer team’s head coach Gregg Berhalter. Her husband is a former player who has been coaching USNT since 2018.

Gregg played professional football for several clubs like Zwolle, Sparta Rotterdam, Crystal Palace, 1860 Munich, and LA Galaxy, etc and has worked as a coach for LA Galaxy, Hammarby IF, and Columbus Crew SC.

Rosalind Berhalter was born Rosalind Maria Santana on January 21, 1973, in the United States. She is 49 years old and holds an American nationality.

How did Rosalind Berhalter and husband Gregg Berhalter meet?

Rosalind and her husband both attended the University of North Carolina in the early 1990s where they first met.

Greg studied there from 1991 to 1994 and was also a part of the college soccer team. Likewise, Rosalind also attended college at the same time and also played for the Tar Heels women’s soccer team.

She was introduced to Gregg through a mutual friend as they both were on the college soccer team.

They started dating in around 1993. The pair had an affair for around 6 years and married in 1999.

Rosalind and Gregg are the parents of 4 children.

Her son is a Footballer

Rosalind’s one of the four children Sebastian Berhalter has followed in his parents’ footsteps and has chosen soccer as his future.

He is currently signed to Major League Soccer club Vancouver Whitecaps FC and plays as a midfielder.

Sebastian was born on May 10, 2001 (age 21 years), in London, United Kingdom. He grew up in Columbus, Ohio trained in football at the academy of Hammarby IF and Columbus Crew.

Gregg Berhalter is a former player who currently serves as a head coach of the United States men’s national soccer team.

He was born Gregg Matthew Berhalter on August 1, 1973, in Englewood, New Jersey, the U.S. Growing up in Tenafly, New Jersey, he played college soccer at the University of North Carolina at Chapel Hill.

After his graduation, he started his professional career with Raleigh Flyers in 1993. During his playing career, he played for Zwolle, Sparta Rotterdam, Cambuur Leeuwarden, Crystal Palace, Energie Cottbus,1 860 Munich, and LA Galaxy.

Gregg even represented his national team at the World Cup 2002 and 2006. He started coaching as an assistant coach for the LA Galaxy in 2011 and has coached Hammarby IF, and Columbus Crew SC.

He has been serving as the head coach of the United States National Soccer Team since 2018 and might lead the team at the FIFA World Cup 2022 in Qatar.

She might have taken another profession to support her living but we don’t have any information about that.

Her husband Gregg is a head coach of the USMNT and is reported to be the highest-paid US Soccer employee with a salary of about $1.3 Million in 2022.

Gregg Berhalter’s net worth in 2022 is reported to be around $10 Million.