Who is Sasha Attwood? Know about Jack Grealish’s Girlfriend 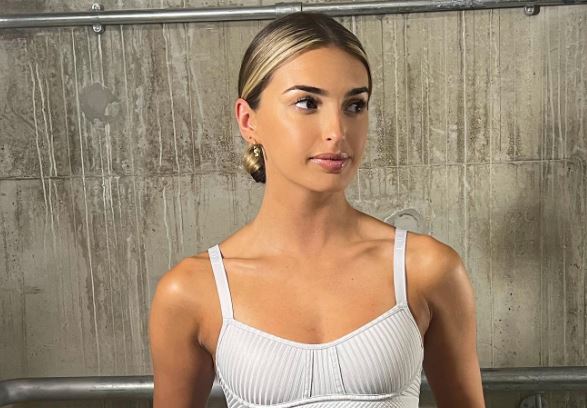 Sasha Attwood is a model, YouTuber, social media personality, and makeup artist, famous for being the girlfriend of English footballer Jack Grealish.

Jack Grealish is an English professional footballer who plays as a winger or attacking midfielder for the Premier League club Manchester City and the England national team.

Furthermore, Grealish joined Aston Villa at the age of six, and in May 2014, after spending time on loan at Notts County, he made his debut for the team.

Moving Further, Let’s know more about Sasha’s life including her professional career and life with Grealish.

On 17 February 1996, Sasha was born in Solihull, West Midlands, England, the UK to her wonderful parents. Growing Up, Sasha was very keen on modeling, dancing, swimming, and sports.

At the age of 13, Sasha found herself a perfect agency and she is in the fashion industry ever since.

In addition, A scout spotted her while she was shopping on the streets of Birmingham.

As of 2022, Sasha worked with various notable fashion brands such as Boohoo and House of Fraser.

She holds English citizenship. She was born and raised as a catholic alongside her siblings, whose identity is not available on the internet.

Despite being in the limelight since a very young age, she has managed to keep her life very private.

She has not revealed her parents’ names, siblings’ names, educational background, educational degree, etc. However, we know one thing for a fact she studied at St Peter’s Roman Catholic Secondary School.

Sasha Attwood and Jack Grealish met as teens at St Peter’s Catholic School in Solihull. They have known each other for around a decade.

The couple has an on-and-off relationship as Jack was linked with some women during this time. Jack reportedly had encounters with Love Island star Amber Gill and actress Emily Atack.

However, Sasha has vowed to stand by him despite his cheating rumors.

The couple has a very good relationship now and is frequently seen on dates and vacations.

On 10 September 1995, Jack was born in Birmingham, West Midlands, and raised in nearby Solihull to Karen Grealish and Kevin Grealish.

Grealish became the most expensive English footballer ever in 2021 when he transferred to Manchester City for £100 million.

Likewise, Grealish confirmed his choice to play for England in April 2016 despite being eligible to represent both England and the Republic of Ireland internationally.

Grealish received international caps for the Republic of Ireland up to the under-21 level.

In May 2016, he participated in the 2016 Toulon Tournament for the first time while representing England’s under-21 team.

Moreover, Jack represented himself at the International level as well.

England showed interest in him while he was playing for Irish youth teams; they even invited him to join their under-17 team in 2011 when he was 15 years old, but he turned them down.

The English FA approached him about switching after he dropped from the Republic of Ireland under-21 team for three qualifiers in October 2012.

Grealish announced his decision to represent England internationally on September 28, 2015. In a 1-0 victory over Portugal at the Toulon Tournament on May 19, 2016.

When Grealish entered the game as a substitute in the 73rd minute of England’s 2022 FIFA World Cup qualification match against Andorra on October 9, 2021, he scored his first goal for his country.

Grealish is famous for his ability to run and dribble past defenders when playing as a winger (often on the left flank, a position that allows him to cut inside onto his stronger right foot).

Moreover, He is an agile player with quick footwork, a decent change of pace, and superb balance on the ball because of his low center of gravity, even though he is not endowed with exceptional speed.

Grealish received a fine from Aston Villa in March 2020 after it was determined that he had disregarded government advice to observe COVID-19 requirements by leaving the house.

In the UK, Grealish was given a nine-month driving suspension and an £82,499 fine after pleading guilty to two offenses of reckless driving in March and October 2020, one of which saw him being caught on camera crashing into a number of parked automobiles as he turned a corner.

The referee gave him a warning for diving at Crystal Palace, which resulted in the disqualification of Aston Villa’s equalizing goal.

Matthew Upson, a former England and Birmingham City defender criticized him by saying, “We could see it here and we are a fair ways away.”

He defended himself, claiming that because he is the most frequently fouled player in the league, defenders are more likely to make errors when attempting to stop him and end up conceding more penalties and free kicks.

According to the Statistics, Grealish was the player who was fouled the most in the 2020–21 Premier League season, which supported this.

As a model, Sasha Attwood keeps posting her picture on her social media platforms.

You can find her on Instagram as @sasha__rebecca. She has over 147 K followers and follows over 825 different accounts that include actors, models, TV personalities, athletes, etc as of 2022.

Likewise, she is also available on Twitter as @SashaAttwood.

And as a YouTuber, you can watch her videos on the channel @Sasha Rebecca. She has over 45.3 K subscribers and over 161 videos.

On the other hand, you can find Sasha’s boyfriend Jack on Instagram as @jackgrealish. He has over 5.3 Million followers and follows over 534 different accounts.

Some facts about Sasha Attwood