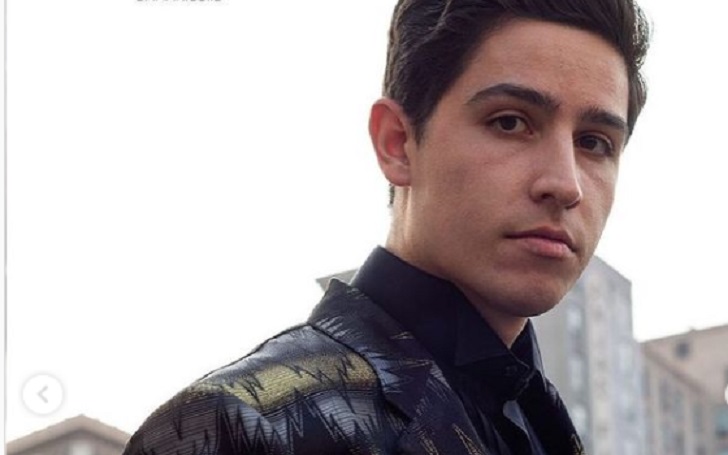 Lorenzo James Henrie is one of the established American actors who gained international recognition after appearing as Chris Manawa on the A.M.C. television series Fear the Walking Dead. He is also a Saturn Award-nominated actor who also appeared on the role of Gabe Reyes on Agents of S.H.I.E.L.D. The 28 years old actor is married to his wife, Kyara Pintos, since November 7, 2015.

Born Lorenzo James Henrie on June 29, 1993, Henrie is now 28 years. He is a native of Phoenix, Arizona, whose parents are Jim Henrie and Linda Henrie. His mom, Linda, is a talent manager, while his dad, Jim, is a producer formerly in real estate.

Henrie is the younger child of his parents as he has an older brother David Henrie. In addition, David is also an actor and director who is widely famous for his work in How I Met Your Mother and Wizards of Waverly Place. The actor siblings have a mixed ethnic background as their maternal grandparents were Italian. Also, his dad has English, German, Swiss-German, and Welsh ancestry.

Lorenzo made his on-screen debut in 2004 starring in the tv series Malcolm in the Middle, where he portrayed Normal Boy. In the same year, Lorenzo landed some parts in television series like 7th Heaven, Arizona Summer, and L.A.X. Similarly, the actor has also appeared in Ghost Whisperer and Wanted in 2005.

Henrie starred in several hit television series such as C.S.I.: Miami, N.C.I.S.: Los Angeles, Fear the Walking Dead, and Agents of S.H.I.E.L.D. By working in those series, the actor has also shared screens with various famous personalities like Dan Bucatinsky, Adam Rodriguez, and Reed Kesler. The C.S.I.: Miami alum became more noted after starring as Chris Manawa in Fear the Walking Dead.

Henrie’s latest projects are Only Mine, and This Is the Year. Now, he is not only engaged in an acting career but is also engaged in producing films. Currently, Henrie is working as an executive producer in Boys of Summer, which is set to release in 2022.

Agents of S.H.I.E.L.D. Cast Henrie is married to his girlfriend turned wife, Kyara Anai. They wedded on November 7. 2015. They got married in the presence of their family and close ones. The pair are now together for over 6 years. The couple is now raising a beautiful child, a daughter. Exploring his Instagram profile, it seems like, Henrie has altogether 3 children.

Now, the happy family resides in some parts of the United States. Meanwhile, This Is the Year star uses Instagram under the username @lorenzohenrie, from where he shares pictures with his wife and family. Besides that, Henrie’s life partner, Kyara, is also an actress who has worked in the movies like Aftermath, Helicopter Mom, and Passage of the North.

How Much Is Henrie’s Net Worth?

Working since 2004, Lorenzo James Henrie has acquired immense limelight, so are his earnings. According to the Net Worth Post, Henrie has a net worth of around $8 million. He mostly made it through her acting venture and has also started in numerous hit television series. Additionally, Idol Net Worth says his net value is around $6 million.

In 2015, Henrie appeared in the movie Paul Blart: Mall Cop 2. The movie’s budget was $30–40 million, and it grossed around $107.6 million. Not only that, he has starred in Star Trek, which budget was $150 million, and its box office collection was $385.7 million. So, by working on these big-budget projects, Henrie has surely made a huge profit.

Now, Lorenzo is also engaged in producing films, and the average salary of a producer in the United States is $72,115 per year. Aside from that, Henrie might earn something from doing advertisements. Also, he has a strong presence on Instagram and his acquiring from a post is around $301.5 – $502.5.