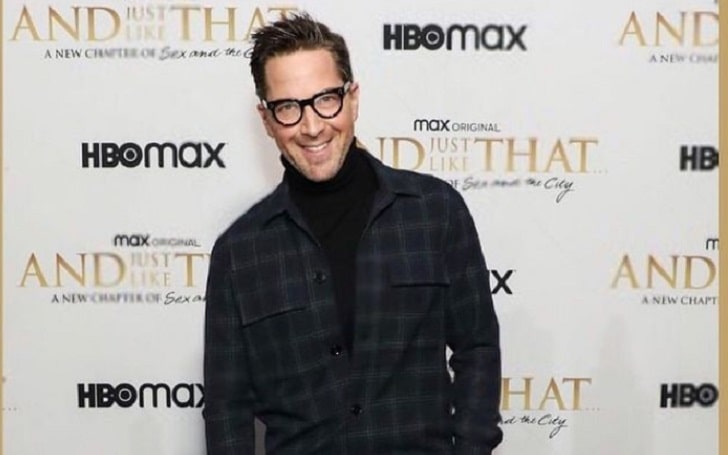 Dan Bucatinsky is a prominent American actor, writer, and producer belonging to Argentine descent who is best identified for his work in movies like Second Act, The Comeback, and Scandal. The 56 years old actor is openly gay and is married to screenwriter Don Roos with whom he has two children, Eliza and Jonah.

The New York City, US native, Dan Bucatinsky was born on September 22, 1965, to his parents, Myriam Bucatinsky and Julio Bucatinsky, who immigrated to the United States. He moved to Argentina from Russia and Poland. He belongs to Argentine Jewish descent. The actor went to Vassar College in Poughkeepsie, New York.

Bucatisnky fluently speaks Spanish and French. The 5 feet 8 inches tall actor was interested in pursuing a career in the film industry. After completing his education, he got professionally engaged in this field.

Take A Look At His Professional Career

Since 1994, Dan Bucatinsky has actively worked as a writer, producer, and actor. Dan debuted on the big screen by portraying Bellhop in the tv movie, Another Midnight Run. After that, he got a chance to work in movies like Party of Five, High Incident, Jenny, Night Stand, The Opposite of Sex, etc. Also, he made his appearance in NYPD Blue, where the actor emerged as PAA David ‘Dave’ Moore.

Not only that, but he has also starred in CSI: Miami alongside Adam Rodriguez and Andrew Walker. Besides, he is also the writer and producer and star of the 2001 romantic comedy All Over the Guy. As a writer and producer, his films or television series credits are Web Therapy, Grey’s Anatomy, Lipstick Jungle, etc. Similarly, he has directed several projects, including It Got Better.

Dan is currently working on his new project, and the upcoming films are Show & Tell and The Grotto. With his great work, Bucatisnky won the Primetime Emmy Award in 2013 for the category of Outstanding Guest Actor in a Drama Series in Scandal.

Dan Bucatinsky’s Net Worth Is $4 Million

Dan Bucatisnky has helped him enjoy a lavish life with his amazing bank balance. According to Celebrity Net Worth, he has a net worth of over $4 million. He has collected this fortune from his multiple profession as an actor, director, producer, and writer. In the United States of America, an actor makes around $50782. Likewise, a director earns $136,435 per year, and a producer has an average salary of $70159.

Bucatisnky has starred in numerous hit movies and television series. So, he might work in advertisement and make a fair profit from it. As per the Influencer Marketing Hub, Bucatisnky’s estimated earning from a post on Instagram is $225 – $375.

Some of his movies and their financial details:-

Dan Bucatisnky is a married man who is hitched to his husband, Don Roos. They first met in 1992 at the premiere of Love Field. And the couple got married in 2008 during the four months same-sex marriage in California was first recognized. Also, they are the parents of two children, daughter Eliza and son Jonah.

The director made headlines after coming out as a gay back in 2014. At first, he was scared to announce it, but Dan received huge support from his fans and well-wishers after coming out. Apart from that, his life partner, Don, is a famous American screenwriter and film director who has been in the showbiz industry since 1979.