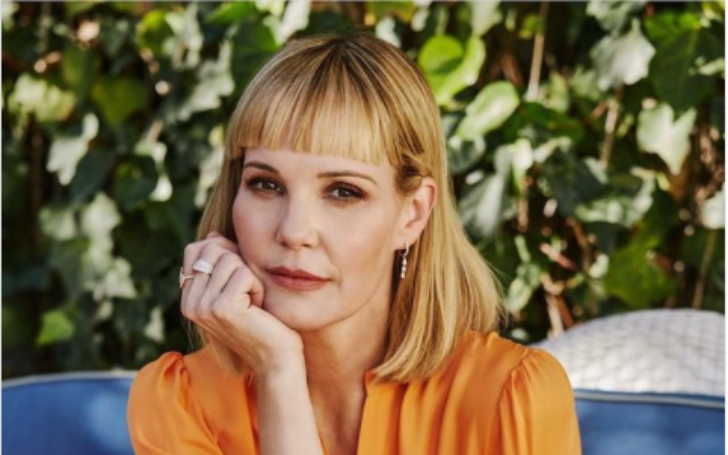 Leslie Bibb is an American actress who gained recognition for playing Christine Everhart in MCU films Iron Man and Iron Man 2. Similarly, the 46-year-old actress is popular for playing Grace Sampson/Lady Liberty in the Netflix series Jupiter’s Legacy as of 2021.

Bibb grew up in Richmond, Virginia, alongside her three older sisters. She went to Saint Gertrude High School and was on her high school dance team.

Although Bibbs went to college, she did not graduate but spent three years at the William Esper Acting Studio.

When Did She Begin Her Professional Career?

Leslie won a model search on The Oprah Winfrey Show in 1990 at the age of 16. After winning the show, she signed a contract with Elite Agency and modeled over the summer, and even went on a trip to Japan.

Thereafter, she replaced Susan Walter as the female lead in the second season of The Big Easy.

The 46-year-old actress made her breakthrough as the lead character Brooke McQueen in the comedy-drama series Popular. In the show, she appeared alongside Carly Pope, Tamara Mello, Christopher Gorham, and several others.

Moreover, she reprised her role as Christine in the second sequel Iron Man 2 which was released in 2010.

In addition, her other acting credits are Movie 43, Take Care, The Babysitter sequel, Running with the Devil, The Lost Husband, ER, Line of Fire, GCB, American Housewife, and more.

As of 2021, she plays Grace Sampson in the Netflix drama series Jupiter’s Legacy opposite Josh Duhamel, Ben Daniels, Andrew Horton, and Elena Kampouris.

According to Celebrity Net Worth, Bibb’s net worth is reportedly at around $4 million as of 2021. She amassed her million-dollar fortune from her successful career of over 2 decades.

Besides, her sponsorship and endorsement deals also aid up a decent amount to her net worth.

In a similar way, To the Bone actress reportedly resides in Los Angeles California where the median house price starts from $898,692 and reaches up to millions of dollars.

Dating The Love Of Her Life Since A Decade

The Popular star is dating fellow actor-boyfriend, Sam Rockwell, for over a decade as of 2021. As per reports, the couple first met in 2007 at the Chateau Marmont in Los Angeles.

They began dating the same year and have been going strong for over a decade.

Likewise, in an interview, Rockwell addressed Leslie as his beloved and said: “She’s my beloved, she keeps me laughing.”

Bibb was previously married to investment banker Rob Born. They tied the knot on 22nd November 2003 amidst family and friends in Zihuatanejo, Mexico. Sadly, the couple filed for divorce and part ways a year later on 7th December 2004.