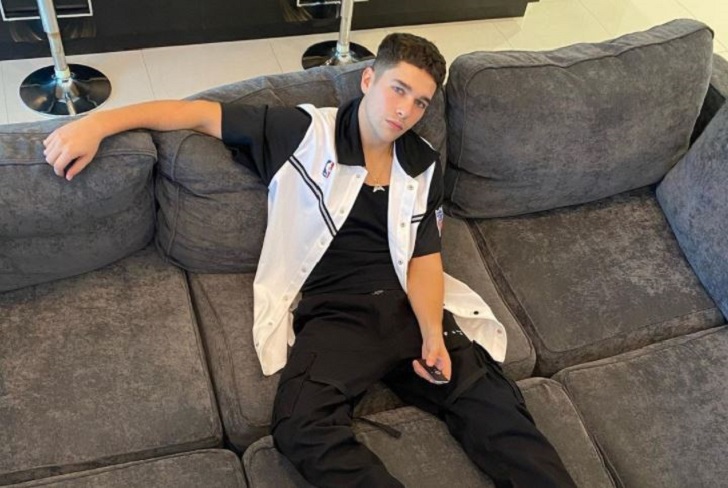 Austin Mahone is a singer and songwriter who started his career from YouTube back in 2010. His first ever video was the cover of Justin Bieber’s “Mistletoe,” who he considers his biggest inspiration. Following that, he has cover songs of many famous artists and worked on his own music. As of 2021, the younger singer has released one album, three extended plays, and two mixtapes. Some of his famous songs include Say Somethin, Say You’re Just a Friend, and What About Love.

Austin Mahone was born on April 4, 1996 to parents Michele Lee (mother) and Charles Edgar Mahone (father) in San Antonio, Texas, USA. Unfortunately, Mahone’s father passed away while he was just 18 months old and Michele was the one who was in charge of his upbringing. He is evidenlty very close to his mother.

He is of French, English, German, and Slovak descent and was raised Catholic.

He attended Lady Birth Johnson High School. After the first year, he couldn’t keep up with the normal school schedule and said his goodbyes. Mahone resumed his studies at his grandmother’s place through homeschooling.

Mahone first uploaded his video in June 2010 and slowly started to build his career on Youtube. He first started by singing cover songs of famous artists like Justin Bieber and Jason Marz.

The musical prodigy debuted at No. 38 on the Billboard Social 50 chart in September 2011, making him the youngest person to do so. By the end of the year, he had risen to #28 on the list and had signed a record deal with YMCM and Republic Records a few months later.

Mahone released his debut single, “11:11,” in 2012, and it peaked at No. 19 on the Billboard Heatseekers list. A second release followed, “Say Somethin,” which was even more successful than the first.

For his admirers, the promising star also produced a few mixtapes. Austin released his debut mixtape, titled ‘This Is Not the Album.’ His second mixtape, titled ‘For Me + You,’ was published on December 30, 2016, via BMG Rights Management. 2 Chainz, Juicy J, and Pitbull all made appearances, and it was a great show.

On October 18, 2017, he shocked his fans with his first-ever studio album; unfortunately, the album was released only in Japan but gained a tremendous response from his fans.

The rising star, like many other celebrities, prefers to keep his personal and romantic life secret. However, he is not far from link-up rumors.

He was formerly linked to Stefanie Scott, though the pair never confirmed their relationship. He was also in a relationship with singer and actress Camila Cabello-they briefly dated in 2014.

Similarly, he dated former girlfriend Katya Elise Henry for a year from mid-2016 to 2017. Recently, there has been speculation that he is dating Becky G since the two have been seen together on several occasions.

They also often feature in one anothers’ social media, adding more fuel to the rumors. However, there is no confirmation yet.

The Say Somethin singer is worth $5 million. Making such a large sum of money at the start of his professional singing career is nothing short of a significant accomplishment for the young man.

Along with his singing career, which is his primary income source, Mahone also earns from his self-titled youtube channel with 4.3 million subscribers. As per the sources, she makes $20,00monthly and $831-$13.3k annually from the channel.

Similarly, his sponsorship deals and advertisements add more to his riches. He was the “Teen Ambassador” for Lil Wayne’s Trukfit fashion clothing line and McDonald’s commercials’ face.