Darwin Nunez’s Girlfriend Lorena Manas: Do they have Children? 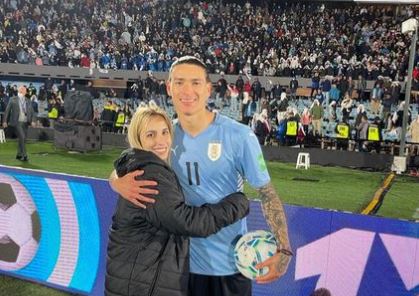 Darwin Nunez, an Uruguayan professional footballer, is the talk of the town after signing with the new club Liverpool FC in the Premier League. Earlier, he played for Benfica in the Primeira Liga and was named the Primeira Liga Player of the Year.

Darwin joined Liverpool for a €75 million fee plus €25 million in add-ons in 2022. He made his debut against Fulham and scored an equalizer.

The Peñarol academy product has been making headlines and is expected to be a goal-scoring machine for Liverpool alongside Mohamed Salah.

The 23-year-old forward was born to his parents Silvia Ribeiro and Bibiano Núñez. What’s his Relationship Status? Is the 6 feet 2 inches tall striker married? Who is his Girlfriend?

Who is Darwin Nunez’s Girlfriend?

Darwin Nunez is currently dating his girlfriend Lorena Manas for a couple of years now. His partner Lorena is Spanish and the pair is together since Darwin played for UD Almeria in 2019.

Though several sources have claimed them to be married, they have not tied the knot yet.

The couple has a very good relationship despite the 9 years of the age gap. Lorena is 31 and is around 9 years older than Nunez.

Darwin and Lorena share a son named same as him Darwin Nunez Jr. born on January 3, 2022. Moreover, Nunez has adopted Manas’daughter from her past marriage.

Who is Lorena Manas?

The hot WAG of Liverpool’s forward Lorena is a social media star and model from Almeria, Spain. She was born on December 10, 1990, and is 31 years old.

She is on Instagram with the handle @lorenaamanas where she frequently shares her personal photos among her 62k followers.

Who was Lorena Manas previously Married to?

Darwin’s partner Lorena was previously married to fellow Uruguayan footballer Aleix Vidal. They met in Almeria in 2012 while Vidal played for UD Almeria.

Their only daughter Chloe was born before their marriage in early 2015.

After dating for around 3 years, they got married in Spain on November 25, 2016. The couple had a sudden plan for a wedding as Vidal was planning to join a Qatari club and they would require official marriage documents to live together in the Middle Eastern country.

Vidal did not make a move to Qatar and the couple’s relationship faded over time. They split in 2018.

Nunez is an Uruguayan professional footballer who is currently signed to the Premier League club Liverpool FC.

His parents are his father Bibiano Núñez and his mother Silvia Ribeiro. His father worked as a builder while his mother was a hawker of milk bottles.

Darwin played for La Luz, San Miguel de Artigas, and Peñarol during his youth days. He made his senior debut with Penarol in 2017 and also played for Almeria and Benfica.

Nunez has also won the Uruguayan Primera División with Penarol and recently won the FA Community Shield with Liverpool. Moreover, he was also named the Primeira Liga Player of the Year while playing for Benfica in 2021.