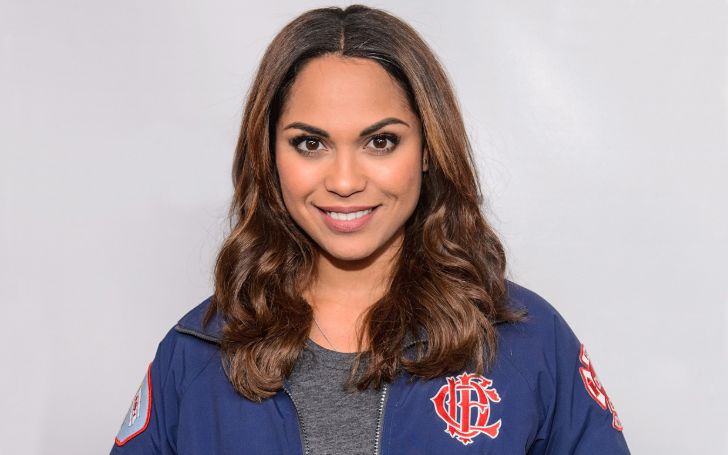 Monica Raymund, 34, is an American actress best known for her roles as Maria Torres in Lie to Me and as Dana Lodge in The Good Wife. Likewise, she is also known for the Chicago Fire and Hightown.

Monica Maria Raymund was born on 26th July 1986 in St. Petersburg, Florida, the United States under the birth sign Leo. As of 2020, Raymund is 34 years old.

She was born to Steve Raymund and Sona Lara. Likewise, her nationality is American and has mixed ethnic descent.

Talking about her education, she went to Shorecrest Preparatory School and graduated in 2004. Likewise, she later graduated from Juilliard School in 2008.

According to Celebrity Net Worth, Monica is worth around $4 million as of October 2020. Her fortunes come from her successful acting career of 16 years.

Raymund made her film debut as Sarah in the 2007 short film Fighter. She then starred in Love? Pain, Arbitrage, Brahmin Bulls, and Happy Baby.

She made her career breakthrough as Maria “Ria” Torres in the Fox network series Lie to Me. She starred in the show from 2009 to 2011 in a total of 48 episodes alongside Tim Roth, Kelli Williams, and Brendan Hines.

Similarly, from 2011 to 2012, Monica starred as Dana Lodge in the political drama series The Good Wife along with Julianna Margulies, Matt Czuchry, Titus Welliver, and Archie Panjabi.

As of 2020, she portrayed lead Jackie Quinones in the American crime drama Hightown opposite Riley Voelkel, Shane Harper, and Atkins Estimond.

Is The Hightown Star Gay ?

The 5 feet 4-inch tall actress is openly bisexual and a prpund member of the LGBTQ community. Likewise, she is reportedly dating cinematographer Tari Segal.

The couple first met on the set of Chicago Fire and eventually began dating ever since.

On the other hand, she was previously married to Neil Patrick Stewart. The couple tied the knot on 11 June 2011 in presence of family and friends. However, the duo part ways in 2014.

As of October 2020, Monica has over 106k followers on Instagram. However, she is not active on Twitter at the moment.