Who is Luc Coulier? Inside the Life of Dave Coulier’s Son 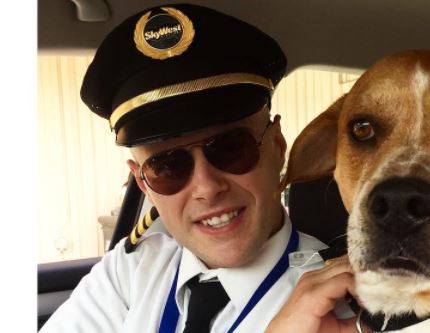 Luc Coulier is an American pilot. However, he is popular as the only child of Dave Coulier, an American actor, stand-up comedian, impressionist, and television host.

His father is widely known for portraying on ABC sitcom Full House as Joey Gladstone. Unlike his father, Luc has chosen his career in aviation.

The celebrity son is not popular like his father but is living his dream as a pilot. Want to know more about him? Go through the article, here we have collected everything about his parents, relationship, professional career, and more.

Luc was born on November 14, 1990, in Detroit, Michigan and is 31 years old as of 2022. He is the only child born to American actor Dave Coulier and his actress-model mother Jayne Modean. He doesn’t have any siblings.

He attended Embry–Riddle Aeronautical University and graduated in 2013. After his college, he trained to be a pilot and has been since then pursuing a career in aviation.

Luc Coulier Is a Pilot

After his education and training, Luc Coulier has been serving as a pilot for various companies. He first worked at Ryan Air, INC. in Anchorage, Alaska, as a SIC CASA212 in 2014. He then moved to ERJ-175 at Skywest as a captain.

Luc is now an Airline Pilot/First Officer at FedEx since September 9, 2019.

Who are his parents?

Luc Coulier is a celebrity child born to his celebrity parents Dave Coulier and Jayne Modean. Both of his parents are actors. His father is also a comedian and a private pilot like his son.

Dave gained popularity after portraying Joey Gladstone on the ABC sitcom Full House. Besides, he has also voiced for Peter Venkman on The Real Ghostbusters.

Moreover, he is known for his works in Farce of the Penguins, The Little Mermaid, The Even Stevens Movie, and Mighty Magiswords.

Luc’s mother Jayne is also an actress and model but is mostly known for her broadway works. Moreover, she has started in movies and TV series like Spring Break (1983) and House II: The Second Story (1987), Cheers (1987) S6 Ep12, Werewolf (TV series), Trauma Center (1983), Street Hawk (pilot episode), Full House, and The Fall Guy.

Luc’s father and mother met each other in the late 1990s and soon got married. The couple welcomed their child Luc in 1990. However, after the birth of their son, things between the couple changed and were separated.

The couple was married only for two years and divorced. However, they haven’t yet shared the reason for their split.

Dave Coulier is currently married to his photographer wife Melissa Bring. The couple started dating in 2005 and married after 9 years on July 2, 2014, in Montana.

His wife Melissa has been a good stepmother to Dave’s son. She sometimes goes to pick Luc up after his flight to the airport and loves him a lot.

She also sometimes shares his photo on Instagram and calls herself a proud mom.

Besides, Dave also dated Alanis Morissette after his divorce from Luc’s mother.

Who is Luc Coulier’s Girlfriend?

The 31-year-old celebrity son is currently engaged to his girlfriend Alex Cochran. The couple started dating in 2015 and have already been together for 7 years.

Luc proposed to his to-be-wife in March 2020 after 5 years of relationship.

He shared the happy news of their engagement on Instagram, with his fiance flaunting her ring, and wrote:

After five years, I finally asked the most beautiful and amazing girl I’ve ever known to marry me and she said Yes!!! Happy to say I am engaged to the love of my life.

The couple has a deep affection for each other and frequently expresses their love publicly. They even take Instagram to show love toward their partner.

Luc even had a beautiful line written to his fiance on Valentines’ day in 2019.

Words cannot describe how much I love this girl. I am so blessed and happy to have her in my life and to be able to call her my valentine. I love you so much and happy Valentine’s Day to my beautiful girlfriend Alex Cochran.

Are they planning to Marry?

No, Luc and his fiance Alex, despite being engaged for more than 2 years, don’t have revealed any plan to get married soon.

They might have thought about their wedding previously but due to COVID restrictions, had to postpone probably. As things are getting much better, the couple might soon have a grand ceremony.

How much is Luc Coulier’s Net worth?

Working as a pilot, Luc earns around $150,000 annually. More than that, the pilot also gets bonuses. He has a net worth of about $1 Million.

His father Dave is a popular American actor with a net worth of $5 Million.