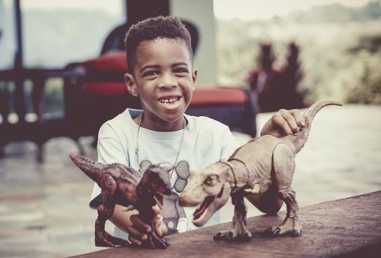 Titan Jewell Weatherspoon is a popular celebrity child and social media star. He is the son of Kelly Rowland, an American singer, songwriter, and media personality, and her husband Tim Weatherspoon.

Titan became the center of attraction since his birth as he was the child of popular parents. Read the article to know everything about the 7-year-old kid.

How old is Titan?

Titan Weatherspoon was born on November 4, 2014, as the first child to singer mother Kelly Rowland, and her talent manager husband Tim Weatherspoon. He also has a younger brother named Noah.

“We are thrilled to announce that today we are the proud parents of our first son. We are blessed to report everyone is healthy and happy!”

His name was already decided by his father in August which his mother said in an interview.

“The dad picked out the name. It has to do with family.”

He holds an American nationality and belongs to the Afro-American (Black) ethnicity.

Titan’s mother Kelly Rowland, born on February 11, 1981, is an American singer-songwriter, actress, and television personality. She gained popularity as a member of a girl’s band Destiny’s Child. She later released her solo album Simply Deep which sold over 3 million copies. The album included the Billboard Hot 100 number-one single “Dilemma”.

Kelly even appeared as a judge on The X Factor UK (2011), as well as The X Factor USA (2013). She has won four Grammy Awards, one Billboard Music Award, two Soul Train Music Awards, and several nominations.

On the other hand, his father Tim is a talent manager. He has also worked with Kelly as a producer and a manager.

His Parents Relationship and Married Life

His mother Kelly and father Tim started dating in 2011. After some years, Kelly announced her engagement with Tim on December 16, 2013, on The Queen Latifa Show. The couple got married after some months on May 9, 2014, in Costa Rica. Their family, relatives, friends, and guests including Beyonce and Solange were present at their wedding ceremony.

The couple became the parents for the second time with the birth of their second Noah Jon Weatherspoon on January 21, 2021.

Titan who is 7 years old is an elementary kid who currently attends primary school. Besides, he loves playing with toys and games.

Kelly Rowland’s son is already a star on Instagram where he has around 14k followers. His Instagram bio reads, “I’m Young, Gifted and Black!!!!”. His account is filled with his personal photos where he can be seen playing with toys most often. Besides, he loves playing with his younger brother who is 1 year old.

How is his Lifestyle? (Net worth)

At the young age of 7, Titan already is a big name but is yet to make earnings of his own. He currently enjoys his parents’ income and possessions. Titan’s life is lavish as shown on Instagram.

Titan’s parents are popular personalities who have a net worth in millions. His mother is a famous singer who has a net worth of $12 million. She earned through her album sales and as a coach on The Voice and different shows. She was also a winner coach of The Voice of Australian season 7 where she earned around $5 million.