Vanya Seager- Robson Green’s Ex-Wife: Where is she now? 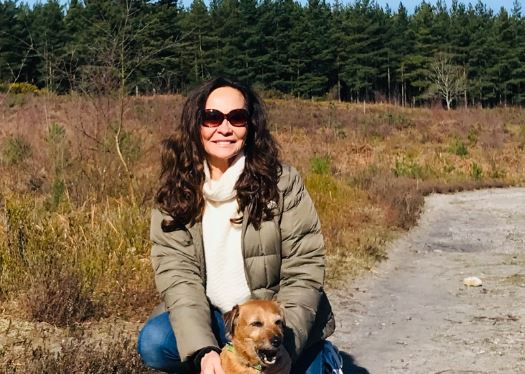 Vanya Seager is a Hong Kong-born English actress best known as the ex-wife of Robson Green, an English actor, angler, singer-songwriter, and presenter.

She was a Page 3 (nude) model and later started working as an assistant for producer Simon Cowell.

Vanya Seager was born in 1955 in Hong Kong. She is 67 years old and holds both Hong Kong and English nationality.

She was born in a middle-class family who were common people so we don’t have any information about her childhood and family.

Seager moved to the United Kingdon at some point after her teenage where she worked as a Page 3 model and posed for several nude photos.

Vanya currently resides in Guildford with her two children.

The former actress was married to her first husband Joey Martyn-Martin. She used to work as a model at that time while her then-husband was a property developer.

They together have a daughter named Lara born in the 1990s.

Her husband was 27 years older than her which might have created differences between them, so, the couple split after some years of marriage.

Vanya Seager met her second husband Robson Green while working as an assistant for Simon Cowell in 1995. Simon was working as a producer for Robson and Jerome Flynn’s version of hit Unchained Melody.

They fell for each other while working together and soon started dating.

After dating for around 5 years, they welcomed a son named Taylor Seager-Green on April 29, 2000.

Vanya and Robson married on 10 March 2001 at Cliveden House in Buckinghamshire. Their son was around 1 year old at the time of their wedding.

On October 30, 2011, the pair revealed that their marriage has ended after a decade. Later it was reported that Green was having an extra-marital relationship with the vicar’s wife.

Prior to marrying Seager, Green was wedded to occupational therapist Alison Ogilvie. The two knew each other through Green’s close friend and television director Andrew Gunn.

They tied the knot on 22 June 1991 but later separated after 8 years of marital relationship.

Vanya’s marriage to Green ended in just 40 seconds since the court did not take a long time as the couple hadn’t lived together for more than two years.

Judge Caroline Reid announced the decision of the court in 40 seconds in October 2013. The couple parted ways in October 2011 and did not live together after that.

They even didn’t talk to each other but had shared some texts for the sake of their son Taylor.

Vanya was the one to end the marriage as she mentioned that she found it intolerable to live with him.

‘I haven’t talked to her since we parted. We are in touch. But we don’t speak. We communicate by text. It’s nice and safe that way. And that’s what Taylor needs. I don’t know why Vanya decided it’s better not to speak but, that’s what she has decided. It wasn’t my decision. It wasn’t me that wanted to do that. She decided. Frankly, I’m not sure how she perceives me now.’

‘Vanya and I just grew apart. I don’t blame it on the career. It’s just we were different and we didn’t develop together. My mind went in one direction, hers in the other. OK, maybe it is being away all the time, maybe it’s not being the greatest husband in the world, but by default that does not make you a bad father. But I try to keep my side of the street clean and I am a good dad.’

Moreover, he is also quite famous for his role as Dr. Tony Hill in the ITV crime drama series Wire in the Blood.

He was born Robson Golightly Green on 18 December 1964, in Hexham, Northumberland, England. His father Robson Green was a miner while his mother Anne worked as a cleaner and shopkeeper.

Green studied at Dudley Middle Comprehensive School and joined the Air Training Corps at the age of 16. However, he quit after the training.

He learned the guitar and even appeared in some plays. Moreover, he also training boxing and fought some professional fights.

At the same time, he also worked as a draughtsman at Swan Hunter’s shipyard. After working there for two years, he decided to pursue his career in acting.

Robson made his debut with Shields Stories in 1988 but his breakthrough role came in Casualty as Jimmy Powell. Besides, he has even presented shows like Extreme Fishing, Extreme Fishing Challenge, and Tales from Northumberland.