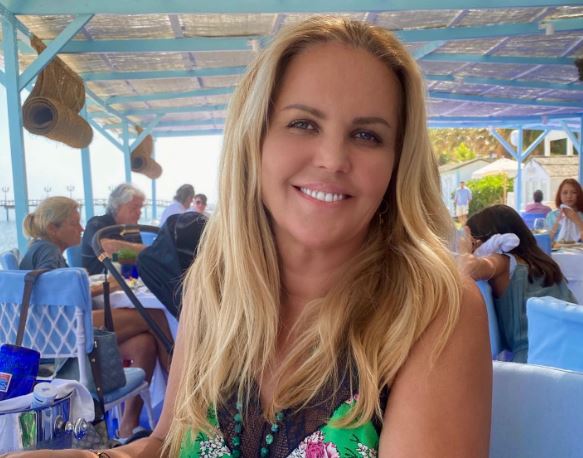 An interior designer by profession, Anette Qviberg got massive fame after she married Swedish actor and filmmaker Dolph Lundgren. Besides, she is also a jewelry designer and fashion stylist.

She is the second wife of Lundgren and has two children with him. They were married for around two decades and divorced in 2011.

Anette has already moved on with her new marriage. Who is her current husband? How is her relationship with her ex-husband, Dolph Lundgren? Read all the unknown facts about the ex-wife of a film star.

Her mother Kari Qviberg is an artist but the details about her father is unknown. Her parents separated when she was young and her mother married her stepdad Staffan.

Qviberg comes from Swedish ancestry. She also has a brother named Lole.

Anette Qviberg is the second wife of Dolph Lundgren. She met Dolph during her undergraduate years while he was still married to his ex-wife Peri Momm.

They became close in a short time after Dolph divorced his first wife.

Anette and Dolph got married on February 27, 1994, after a year of his divorce. After their wedding, the couple relocated to Spain near Marbella.

They share two children both daughters named Ida Lundgren and Greta Eveline Lundgren. The first child Ida was born on April 29, 1996, while the younger daughter Greta was born in 2001.

They used to live in Stockholm at the time of their children’s birth.

Anette’s first child Ida is a model and has worked with Wilhemina and Trend. Moreover, she has also appeared in the movies “Castle Falls, and “Command Performance,”.

Anette and Dolph separated after 17 years of togetherness and divorced in 2011.

Has she Married again?

Anette remained single for some years after her divorce. She then began dating a Spanish real estate agent Carlos Lara Sanchez and tied the knot with him.

Despite having a long-distance relationship, they still have a deep love for each other.

Carlos reportedly has two sons from his past relationship whom Anette has adopted and live a happy life.

Moreover, she has also worked in furniture design.

Who is Dolph Lundgren?

Her former husband Dolph Lundgren is a Swedish actor, filmmaker, and martial artist who has starred in more than 80 movies.

He was born Hans Lundgren on 3 November 1957 (age 64) in Stockholm, Sweden. His mother Sigrid Birgitta Tjerneld was a language teacher while his father Karl Hugo Johan Lundgren was an engineer.

He has three siblings, two sisters, Katarina and Annika and a younger brother Johan.

Dolph had a troubled childhood as he was often abused by his father which later motivated him.

“I still love my father, no matter what happened. There are many things about him I still admire. As a child, I was probably too much like him, very stubborn—perhaps that’s what he couldn’t deal with.”

During his college days, he trained in karate and even worked as a bouncer. Dolph moved to New York with Grace Jones where he started pursuing acting.

Dolph is currently engaged to his fiance Emma Krokdal, a Norwegian personal trainer, since June 2020.

They first met in 2019 at a gym Equinox Center in Los Angeles where she worked as a personal trainer. They began dating after some months and made public appearances together quite often.

His girlfriend Emma is 25 years old and is 38 years younger than Dolph. Despite the huge age difference, the couple has no issue and are planning to marry soon.

The Swedish actor first dated Jamaican singer Grace Jones. She hired him as her bodyguard after meeting him at a nightclub where he worked as a bouncer.

They soon started dating and Grace took him th New York. He then dated American model Paula Barbieri for some time.

Dolph married his first wife Peri Momm in 1991 but divorced after a year. He then walked down the aisle with Anette Qviberg and shared two children.

After that, he also had an affair with Jenny Sandersson.

Anette and Dolph, when they were still married, discovered that their Marbella home was burgled by three masked men in May 2009.

They tightened up Qviberg and asked for money and jewelry but they left the house as soon as they realized that it was owned by Dolph.

Lundgren later got some hints and looked for the robbers but did not find them. After the incident, Anette’s daughter Ida had PTSD while she was also traumatized and also had a divorce after some time.

Anette Qviberg’s Earnings and Net worth

She earns thousands of dollars annually and has a good net worth reportedly around a million.

On the other hand, her former husband is a popular figure who has starred in more than 80 movies. His net worth is reported to be around $20 Million.