Sepideh Moafi- Born to Iranian Parents in Germany: Who is her Partner? 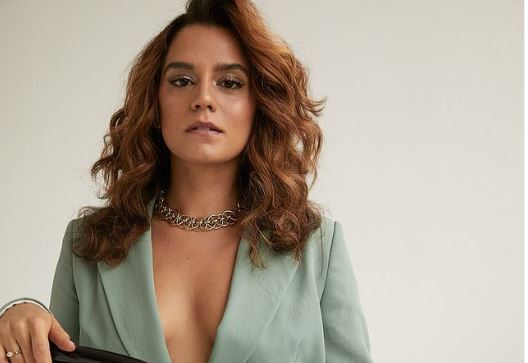 Sepideh Moafi, an Iranian-American actress and producer, is a regular cast on Showtime’s The L Word: Generation Q where she portrays Gigi Ghorbani.

She has been featured in the upcoming movie Black Bird as Lauren McCauley.

Born in a Refugee Camp in Germany

Sepideh Moafi was born on September 18, 1985, in Regensburg, Bavaria, West Germany. She is of Iranian roots with Iranian-German descent.

Iranian-American by nationality, she was born to Iranian parents, father Enayat, and mother Soraya, who were forced to leave Iran due to war.

She has an older sister Setareh Moafi, who is a doctor.

Her parents lived 2 years in Turkey before her birth. They later traveled to America after getting visas as refugees and seeking political asylum.

While attending high school, her choir director was impressed with her opera and arranged for an opera teacher to teach her.

Sepideh even took classes at Seydways Studios and The American Conservatory Theater.

While studying at the University of California, Irvin, she also took classes at The San Francisco Conservatory of Music and graduated in 2007.

After some years, he graduated with an MFA degree in acting from the University of California.

In her early career, Moafi worked in a health insurance company to support her education and living. Besides, she even worked as a voice instructor and coach at the Amabile School of Music.

Sepideh Moafi first appeared in the movies Black Box and Best Man in the Dark in 2014. She also featured on a show called ‘Notorious’ in 2015, where she played the role of Megan Byrd.

The German-born Iranian-American actress is popular for his role in the critically acclaimed The deuce as  Loretta. He even appeared in the second season of Falling Water as Alexis Simmons.

She also had short roles in the movies Limitless, The Blacklist, and Nurse Jackie.

Who is Sepideh Moafi’s Partner?

The L Word: Generation Q actress, who plays as Gigi Ghorbani, the lesbian partner of Dani Nùñez played by Arienne Mandi in the movie, is a straight woman in real life.

Though she had several on-screen romances, she actually is single off-screen.

Sepideh doesn’t have a boyfriend or partner and is enjoying her unmarried life. She has remained private about her relationship and affair.

The actress, however, has expressed her love for her adopted puppy, Simone de Beauvoir. She introduced her dog to her Instagram fans by posting a photo of them and wrote:

Movies Earnings and Net worth

Sepideh Moafi, 36, has been living her life working as an actress. As a supporting actress in several movies, she reportedly earns well to live a life as she desires.

She charges a couple of thousands of dollars per episode to play in the TV series and also receives well from the movies.

Besides, she also earns from advertisements and social media Promotion.