Who is Nettie Laurita?- Mother of Dina Manzo and Caroline Manzo 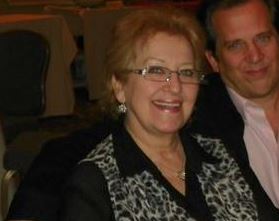 She was married to her husband Joseph Laurita for 67 years until his death and has 11 children.

Nettie, who is of Italian descent, was born in the United States on July 28, 1937. She is around 85 years old as of 2022 and holds an American nationality.

Her daughters Dina Cantin and Caroline Manzo are TV personalities and entrepreneurs who became popular after appearing on The Real Housewives of New Jersey.

Was Married for 67 Years

The celebrity mother Nettie is the widow of her late husband Joseph Laurita.

The couple was together for 67 years from 1953 until her husband’s death in 2020. The former couple had no issues in their marital relationship and lived together for over six decades beautifully.

Nettie Laurita’s husband Joe passed away at the age of 85 in 2020. She including her children and relatives mourned the death of her late spouse.

Her youngest daughter Dina shared a video of Joseph walking on her Instagram and wrote:

Her other daughter Caroline also mourned her father’s death. She posted a photo of herself with her father and captioned it:

His favorite song was “My Way,” and he lived his life accordingly. It’s his way. There has never been a harder man, and he demonstrated that strength again and time again in his final days. May God continue to bless you and offer you eternal peace, Dad. Recognize that you were cherished. In our hearts forever

Some of Nettie Laurita’s children are celebrities. Her daughter Caroline Manzo is a TV personality and entrepreneur who appeared in The Real Housewives of New Jersey.

Likewise, she was also a cast on her own spin-off show, Manzo’d with Children. She is in a marital relationship with Albert Manzo and has three children.

Laurita’s son Joseph Laurita is a film producer while the other son Jaime Laurita is a chef and a businessman.

Nettie’s son Chris Laurita, also a TV personality like his siblings, has appeared in The Real Housewives of New Jersey, Manzo’d with Children, and Bethenny.

Chris is married to actress Jacqueline Laurita since 1996 and has two children.

Nettie’s youngest child Dina is an American businesswoman and TV personality. She became famous after appearing in The Real Housewives of New Jersey.

Who is Dina Manzo?

Popular as Dina Cantin, she was born Claudine J. Laurita on March 7, 1972, in Brooklyn, New York.

At 6, her parents relocated to Wayne, New Jersey with Dina and her 10 siblings.

Dina debuted on television in an episode of VH1’s My Fabulous Wedding in 2007. She became famous after starring in the first two seasons of The Real Housewives of New Jersey.

She also hosted her own show Dina’s Party on HGTV for two seasons until its cancellation.

Dina Manzo’s Failed Marriages: Who is her current Husband?

Dina was first married to a man named George with whom she has a daughter named Alexia.

She then married her second husband Tommy Manzo in 2005. They split in October 2012 after she found Tommy cheating on her many times. They were married for seven years.

She then started dating her boyfriend Dave Cantin and married on June 28, 2017. The couple has been living a beautiful life since then.

Dina Manzo and Caroline don’t have a good relationship recently. Things between the two siblings heated up after Caroline spoke in support of her brother-in-law Thomas Manzo, who is her ex-husband of Dina.

Tommy was found involved in two assaults against Dina and her current husband.

Tommy is awaiting the trial for hiring a gangster to assault Dina’s current husband David Cantin in 2015 and carrying out a robbery on the couple.

After his first arrest in 2020, Caroline talked to the media and said that she was heartbroken. She said:

“This is family on both sides. I want to know the truth and my allegiance will lie with the truth. We don’t run from things like this, we address them. And I feel comfortable with that because we are being painted with a brush that does not reflect who we are as people.”

After his second arrest in June 2021, Caroline spoke in support of Tommy and sadi that he is ‘caring and kind-hearted.’

Dina also slammed her sister in several Instagram posts and also had a feud with her nephew Albie Manzo, Caroline’s son.

Net worth and Properties

Nettie supports her daughter Dina in her event management company named Designer Affair. Precisely, he might be doing well with the business and making a good profit.

Moreover, her daughter Dina Manzo has a net worth of $6.5 Million which she managed to earn from her TV career and business.