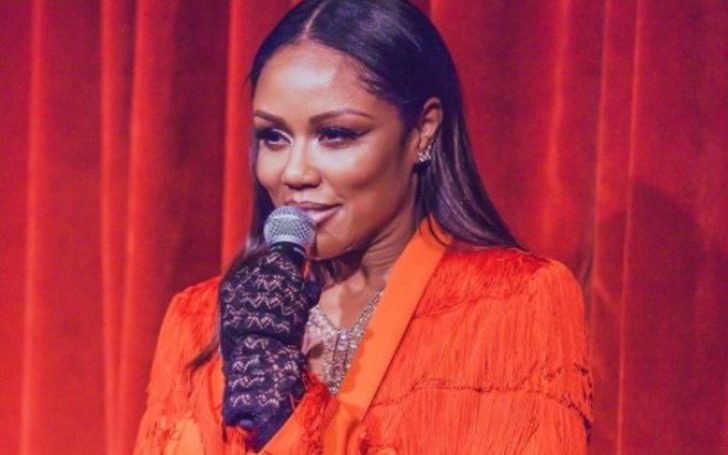 Eboni Nichols is a prominent American choreographer, actress, model, and television personality. She is the choreographer for iconic movies and television shows, including Dream Girls and Jane The Virgin. The multi-talented personality has worked with many superstar singers such as Beyonce, Usher, Jenifer Lopez, Demi Lovato, among others. Furthermore, she is the life partner of the most celebrated singer and actress, Queen Latifah AKA Dana Owens.

When Is Eboni Nichols Birthday?

The choreographer was born on 12 May 1978 in  Eagle, Ada County, Idaho, California, the United States.  She was raised along with her siblings but details of them and family are still missing.

She was passionate about dancing and graduated from the Chapman University Orange, California, with a Bachelor of Fine Arts in Theatre and Dance. To pursue her passion, she joined Los Angeles Lakers Girls, which boosted her career, and got a chance to be a back dancer and a choreographer.

During the time, she got the chance to perform and work for Beyonce, Jennifer Lopez, and Usher.

Nichols started her career as a backup dancer and is now one of the most celebrated choreographers. Her work has featured several commercial advertisements for multinational companies such as Apple, Budlight, Burger King, Crocs, the musical starring Drew Barrymore, among others.

Also, her works are appreciated by cover girls, McDonald’s, Pepsi, Svedka Vodka, and Walgreens. She was the former member of the Los Angeles Lakers Girls and used to be their choreographer. She has also choreographed for the Clipper Girls, Bebe Rehxa, the NFL, Snoop Dogg, Queen Latifah, and Demi Lovato. Eboni’s immense talent got exposure around 2010, and she is one of the most celebrated choreographers of the Hollywood music industry.

Her choreography is performed on different live shows such as American Idol, American music awards, Jimmy Kimmel Live Show, The Today Show, The Grammy, etc. Currently, she is the acting Co-Governer at the Academy Choreograph.

How Did Queen Latifah and Eboni Nichols meet?

Eboni And Dana have been long-time partners since late 2013. This duo has been sharing the screen for more than 12 years now. She first met Dana in one of Dana’s shows where she was performing as a dancer.

The lovely lesbian duo started dating back in 2013. Eboni is 43 years, and Latifah is 51 years old; despite 8 years of gap, they are happily living together. The duo got engaged in 2017.

Recently, the singer showed her immense love and respect towards Eboni in BET Awards 2021. She thanked her partner in the appreciation speech.

How Much Does Eboni Nichols Earn In A Year?

She made a quite good amount of sum through her choreography in live shows, for different celebrities. Her partner has a net worth of $70 million.