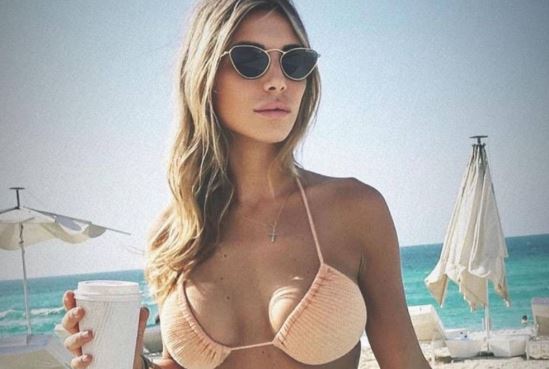 She was born in Roma, Lesotho and studied business administration and banking at Lumsa, a private college in Rome.

Noemi was born in 1988 and is 34 years old as of 2022. She holds Italian nationality. Besides, there is not much information about her family and childhood.

Who is Noemi Bocchi’s First Husband?

Her ex-husband is an entrepreneur and works in the world of youth football. Moreover, he is an owner of the Roman lower league team Tivoli.

They divorced after some years of marriage. Bocchi has two children from her previous relationship with the businessman.

Who is Noemi Bocchi’s Boyfriend?

Noemi Bocchi is reportedly dating Italian former footballer Francesco Totti. They met some months ago and are secretly having an affair.

Totti was recently seen entering Bocchi’s apartment in northern Rome. The Captain entered his girlfriend’s building in the evening and came out the next day with a helmet on his head.

Soon after their romance rumor came up, Totti and his TV presenter wife Ilary Blasi separated. Blasi announced their divorce and wrote:

‘After 20 years together and three wonderful children, my marriage to Francesco is over. However, the separation process will remain a private matter and I will not be making any further statements. I invite everyone to avoid speculation and, above all, to respect the privacy of my family’.

‘I tried to overcome the crisis of my marriage, but today I understand that the choice of separation, although painful, is unavoidable. Everything I have said and done in recent months has been said and done to protect our children, who will always be the top priority in my life. I will continue to be close to Ilary in raising our three wonderful children, always respecting my wife. I trust in the utmost respect for our privacy, especially for the serenity of our children.’

Noemi and the former Roma captain have opened themselves up slowly since his divorce.

She chose San Felice Circeo as her holiday destination recently leaving her favorite Costa Smeralda to be closer to her boyfriend who was in his villa in Sabaudia. This is the first time in last few years that Bacchi did not choose Costa Smeralda as her August destination.

Francesco Totti and Ex-wife Ilary Blasi: Why did they Divorce?

The World Cup Winner met his ex-wife Ilary Blasi in the early 2000s when she was a showgirl at that time. After dating for several years, they married on 19 June 2005 at the Basilica of Santa Maria in Aracoeli.

They had a lavish wedding ceremony that was even aired on TV.

Shortly after the wedding, they welcomed their first child Cristian, on 6 November 2005. Their second daughter Chanel was born after a year on 13 May 2007.

The ex-couple had a good relationship until Totti’s affair with Noemi came up. They recently separated in July 2022.

On the other hand, his ex-wife Ilary is also rumored to be dating an unnamed Italian businessman she met while filming Big Brother.

Who is Francesco Totti?

Totti is an Italian former footballer who played his club career for Roma only for 25 years. Besides, he also represented the Italian Team and won the World Cup in 2006.

He is also popular by his nicknames Er Bimbo de Oro (The Golden Boy), L’Ottavo Re di Roma (The Eighth King of Rome), Er Pupone (The Big Baby), and Il Capitano (The Captain).

His parents are Lorenzo and Fiorella Totti.

Totti is one of the most decorated players in Italian and World Football. He won the World Cup with Italy and has also won the Serie A with Roma.

Besides, he holds several other individual records at the club and international levels.

Noemi Bocchi’s Net worth and Source of Income

Noemi is a flora designer and makes her living with the income earned from her profession. She must have good earnings as she frequently goes on holidays and vacations.

Moreover, she is the alleged girlfriend of former football sensation Totti who has a net worth of about $120 Million.

As a player, he used to earn around $5 Million a year. He reportedly earned around $100 Million during his 25-year-long career.

Besides, he also earns well from sponsorships and endorsements.

Noemi Bocchi has a body figure like a model and has a tall and perfect height of about 5 feet and 8 inches.

She weighs around 55 kgs.