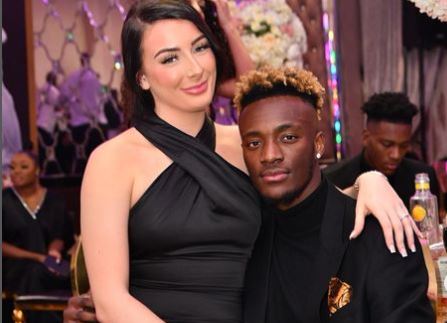 While Tammy is on the pitch scoring goals for the Italian side, his girlfriend can be seen in the stands to cheer him up and celebrate his goals.

What does Leah Monroe do? How old is she? How is her relationship with Tammy Abraham?

Who is Leah Monroe?

Popular as Tammy Abraham’s girlfriend, Leah is a lifestyle vlogger, social media star, and model. She is 23 years old and was born on March 17, 1999.

She was born in London, UK and holds an English nationality.

Besides, the information about her family and siblings is not available. Moreover, her education details and childhood is also unknown.

Monroe grew up in London and took modeling as her passion. She also runs a YouTube channel where she offers beauty tips.

Likewise, she is a popular Instagram personality with more than 120k followers on her official account leahmonroe_.

She frequently shares her beautiful photos with her boyfriend Tammy on her Instagam.

When did Leah Monroe and Tammy Abraham begin dating?

Leah met Tammy in 2015 while he was at the academy of London-based club Chelsea. She was 16 while her boyfriend was 18 at that time.

The couple started dating shortly after and moved together in Birmingham. They currently reside in Rome where her boyfriend plays for AS Roma.

Leah has adapted the Italian lifestyle and is enjoying her life there. The pair celebrates their anniversary on April 18.

They are still unmarried and doesn’t have any children.

The hot WAG revealed that she had a plastic surgery at a Harley Street surgeon and was frightened during the process. To be precise, she had a lip filler, a common form of plastic surgery which went successful.

She even posted the video of herself getting lip injections on her Youtube. In the video, she futrther explained about how she took care of the bruises.

:The bruising was still there (after a few days), it didn’t lighten up a bit, but it was so easy to cover up with lip gloss. They look so natural, I’m so happy with them.”

Her Boyfriend is Professiona Footballer

Leah Monroe is dating Tammy Abraham who is an English professional footballer. He currently plays as a striker for Series A club AS Roma and English National Team.

He was born to Nigerian father Bakumo Abraham and British mother. He also has a brother Timmy Abraham, who is also a footballer and plays at Walsall FC.

Abraham joined tha academy of Chelsea in 2004. He played for the senior team from 2016 to 2021 but was loaned most pf the seasons.

He joined Roma in 2021 and has been playing for the team since then.

Leah Monroe’s Net worth and Earnings

The model and vlogger makes a good income from her multiple profession. She has modeled for various brands and also does product endorsement on her social media account.

Leah earns around $50 thousand in a year. She also gets paid well from sponsored posts on Instagram.

Her boyfriend Tammy signed a 4-year deal with Roma worth €23.08 Million and earns an annual salary of €5.77 Million.

Monroe has a perfect heaight and attractive body figure. However, she looks quit short even with the height of 5 feet 5 inches infrom of her 6 feet 5 inches tall boyfriend.

Her body weighs around 50 kg. She has blue eyes and naturally black hair.