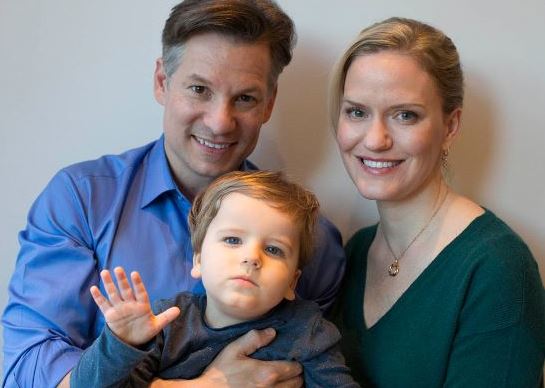 Mary Forrest is the second and current wife of American journalist and author Richard Engel. Her husband has been working as a chief foreign correspondent for NBC News since 2008.

The couple has been married since 2015 and were the parents of two children, but their firstborn son Henry died due to a rare condition on August 9.

What does Richard Engel’s wife, Mary Forrest, do? How is their Married life? What is the cause of the death of their son? Check the article to know everything in detail.

Mary Forrest Married to Richard Engel: Who are their Children

Mary Forrest married her then-boyfriend Richard Engel in a small civil ceremony at City Hall in New York City on Friday, May 29, 2015.

Engel announced his wedding with Mary, who he revealed was a Television producer, through his Twitter and wrote:

“So happy. Just got married! To @MaryKForrest. My longtime love and girlfriend.

They first met each other when Engel appeared as a guest on Martha Stewart’s show in 2010, where Mary used to work as a producer.

The pair reportedly dated for around five years before the marriage. The same year, they announced that they were expecting their first child.

Their son Henry Thomas Engel was born in September 2015, and they welcomed their second son Theodore was born in August 2019.

Mary and Richard faced a tragic incident recently as their son Henry passed away on August 9.

How did her son Henry Thomas Engel die?

Henry was born with a genetic disorder known as Rett syndrome, which is usually present in females but very rare in males and happens when genes on the x-chromosome mutate.

After a couple of years of struggle with the condition, Henry passed away at the age of 5 on August 9, 2022.

Engel announced the death of his child via Twitter and wrote:

“Our beloved son Henry passed away. He had the softest blue eyes, an easy smile and a contagious giggle. We always surrounded him with love and he returned it, and so much more”

Engel is an American journalist and author who has been serving as the chief foreign correspondent for NBC News since April 18, 2008. He joined the network in 2003 as the network’s Middle East correspondent and Beirut bureau chief.

Before that, Richard covered the Iraq War, the Arab Spring and the Syrian Civil War as a freelance journalist for ABC News.

His father, Peter Engel, is a former Goldman Sachs financier, while his mother, Nina Engel, ran an antique store. He also has an older brother, David, who is a cardiologist at New York–Presbyterian Hospital.

Born to a Jewish father and a Swedish mother, Richard comes from mixed ancestry.

Since childhood, he had a reading disorder termed dyslexia. He studied at Riverdale Country School and later graduated from Stanford University with a B.A. degree in international relations.

Richard Engel met his first wife while studying at Stamford University and married her in the late 1990s after dating for several years.

He divorced her in 2005. They don’t have any children, and Richard hasn’t shared any details about his first wife.