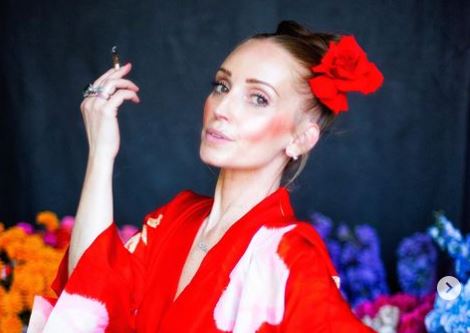 Tiffany Gabrus is the wife of Jon Gabrus, an American actor and comedian. She is a Madam President at The Sweetzer Life.

She met her husband Jon while attending college in 2002 and has been together with him since then.

Tiffany was born Tiffany Bernard in the early 1980s in New York, the United States of America. She is American by nationality and is of Caucasian descent.

Besides, there is no information about her family, siblings, and childhood.

She completed her graduation with Bachelor of Arts Degree in Communications majoring in Radio/TV/Film from Marist College.

After college, Gabrus started working as an Executive Assistant of Music & Business Affairs at New Line Cinema. She worked there for three years until 2008.

She then joined AMC Networks as a coordinator of advertising & promotional marketing in 2008 and worked for three years.

He was then promoted to the position of Manager of Promotions and Activation in 2011 and served for around two years.

Moreover, she also worked at Netflix in a global creative marketing position for a couple of years.

In February 2021, she founded The Sweetzer Life, a Los Angeles-based floral boutique.

Tiffany Gabrus is married to her college sweetheart Jon Gabrus. They first met at Marist College in 2002 where they studied Bachelors.

They were friends at first and later started their romantic life.

On their 17th love anniversary in 2017, her husband Jon expressed his love for his wife and captioned:

Holy shit. 17 years with this broad. I have loved every minute of the 8.93 million minutes since I asked ‘would you like to be my girlfriend?’
Here’s to a hundred more years of telling me every single detail from your day. Love you Rat Queen (and Cheech).

Moreover, the Guy Code star also wishes his wife Tiffany on their every anniversary. In their 9th year of marriage, he posted a photo of them and wrote:

We got married 9 years ago today. We dated for almost 9 years before getting married… Love you, boogs. (And I guess maybe I secretly like posing for all these ‘dumb’ family photos you make me take).

Who is Jon Gabrus?

Jon Gabrus is an American actor and comedian born on January 31, 1982 (age 40) in Long Island, New York, the U.S. He grew up in Long Island and studied at Mepham High School.

The actor attended Marist College where he was a member of the rugby team.

Gabrus’ career began performing in theatres. His breakthrough role came in MTV2’s Guy Code where he was a regular panelist for five seasons.

He has starred in movies like Flock of Dudes, The Little Hours, Scare Package, Bad Hair, etc. Moreover, he has portrayed in the TV series Comedy Bang! Bang!, Adam Ruins Everything, Younger, Craig of the Creek, etc.

Tiffany has an Instagram account where she shares personal photos as well as promotes her business. Her Instagram handle is @thesweetzerlife and is followed by more than 6.7k followers.

Physical Appearance: How tall is Tiffany?

The celebrity wife is around 5 feet 5 inches tall with a perfect body. She weighs 50kgs approximately.

She has a perfect body figure with blonde hair and brown eyes.