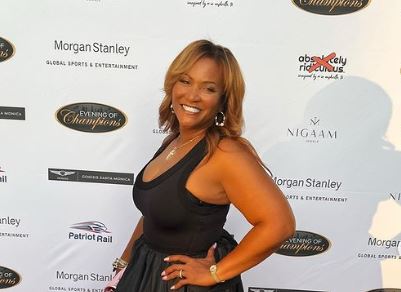 Linda Reese is popular as the wife of Greg Mathis, the former Michigan 36th District Court judge and star of the reality courtroom show, Judge Mathis.

She is a former Detroit Public School teacher and now owns the Children’s Advanced Learning Center. She also appears on the family reality show Mathis Family Matters with her husband and other family members.

Reese was born on May 11, 1963, in Detroit, Michigan, U.S. She holds an American nationality and belongs of African-American descent. She is 59 years old.

Her mother’s name is Sylvia Reese and she has two sibling-sisters named Pat Johnson and Cheryl Gray.

Linda studied at a nearby school and later attended Eastern Michigan University. She graduated with a Bachelor’s degree in 1984.

She worked as a Teacher

After her graduation, she taught at a public school in Detroit and has now retired. She now owns the Children’s Advanced Learning Center in Detroit.

Moreover, she also makes her appearance on the E! reality program, Mathis Family Matters which revolves around the day-to-day life of her husband Judge Mathis.

When did Linda Reese and Greg Mathis Marry?

Linda Reese and Greg Mathis met at Eastern Michigan University in the early 1980s where they both were studying.

Greg had just lost his mother when he met Linda and she supported him a lot during that time. They married on June 1, 1985, after dating for a couple of years.

The pair has four children, two daughters and two sons out of their wedlock. Their first daughter Jade was born in May 1985, a month before their wedding.

Linda and Greg became the parents of second daughter Camara in October 1987. They welcomed their teo sons Greg Jr. and Amir in January 1989 and July 1990 respectively.

The couple has been married for more than 37 years now and still has the same love for each other.

On her birthday in 2019, her husband Mathis surprised her with a Mercedes as a birthday present.

Where are her children now?

Linda’s first child Jade is an attorney, public speaker, and mental health advocate. She studied broadcast journalism at a university in Georgia.

She previously worked as an Assistant State’s Attorney for Prince George’s County Maryland.

Unfortunately, Jade was diagnosed with depression and ADHD in 2006 and now advocates for mental health through The Resilient J.E.M.

The second daughter, Camara is an entertainment lawyer. She is currently married to Ryan Webb and has two children Nora and Zara.

Likewise, Linda and Greg’s son Greg Jr is a TV personality who stars in his father’s show Mathis Family Matters. He is gay and is currently dating his boyfriend Elliott Cooper.

Similarly, the last-born Amir is an American television producer and actor. He is the executive producer of Mathis Family Matters and has worked as an assistant producer on different other shows.

He was married to his ex-wife Linnea who he divorced on 21 January 2022.

He was born on April 5, 1960, in Detroit, Michigan. He was born to Charles Mathis and his wife Alice Lee Mathis and was the youngest among four sons.

His parents divorced when he was very young and was raised by his mother. Greg grew up surrounded by drugs and crimes and eventually joined a Detroit street gang.

Judge Mathis got into drug abuse and was jailed many times. He got an early exit from jail due to his mother’s colon cancer.

After that, he worked at McDonald’s and attended Eastern Michigan University with the help of a close family friend.

Later, he graduated with a B.S. in Public Administration from the Ypsilanti campus.

Linda Reese’s Net worth and Earnings: How much is Judge Mathis’ Net worth?

Linda Reese currently owns a Children’s Advanced Learning Center. It might have been a good source of her income through which she lives a comfortable life.

Moreover, she is also a star on the family reality show Mathis Family Matters with her other family members. The show is getting a good response.

Her husband is a former judge and a reality TV star with a net worth of $20 million dollars. He reportedly earned around $5 Million as a salary.

Linda is around 5 feet 5 inches tall and has a body weight of around 80 kg.

She is acting on Instagram as @lindareesemathis and frequently shares her personal photos with her family members. Moreover, she is followed by more than 30K followers.