Who is Javin Hunter? Everything about the Former NFL Player and NBA Prospect Jaden Ivey’s Father 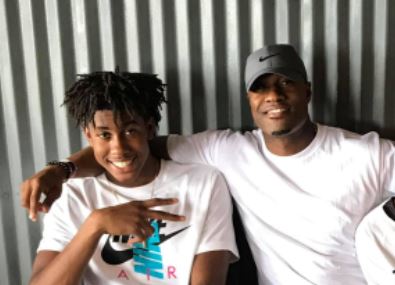 Javin Hunter is an American former NFL player who last played for San Francisco 49ers in the 2006 season. He played college football for Notre Dame and was drafted in the 6th round by Baltimore Ravens in the 2002 NFL Draft.

Javin was a lost name after his NFL career but has again hit the headlines through his son Jaden Ivey. His son Jaden is a basketball player who recently announced his name for the NBA Draft 2022.

Who is the mother of his child? What is Javn doing currently? Know everything about his family, childhood, net worth, and persona life.

The former wide receiver was born Javin Edward Hunter on May 9, 1980, in Detroit, Michigan. He is 41 years of age and holds an American nationality with African-American descent.

Javin’s father James Hunter is also a former NFL player who played for Detroit Lions after being picked 10th overall in the 1976 NFL Draft. Besides, there is no information about his family and siblings.

Journey from High School to NFL

Hunter attended Detroit Country Day School in Beverly Hills, Michigan where he played basketball and was a 3-time All-State and USA Today All-American basketball player. He also played football and was one of the best wide receivers in the country of his class.

After high school, he enrolled at the University of Notre Dame where he was a top receiver in 2001.

Javin was picked 206th overall in the 2002 NFL Dratf by Baltimore Ravens where he played 4 seasons but missed most of the matches due to injury. He then joined San Francisco 49ers in 2006 and took retirement the same year.

Javin’s current marital status is unknown. However, he was married to his college sweetheart Niele Ivey previously. The couple both attended Notre Dame where both of them were athletes.

Javin and Niele started dating in their college days and became parents of their son Jaden Ivey in 2002 when Javin had just started his NFL career. The pair soon split after the birth of child. His wife raised his son as a single mother.

Besides, Javin also has another son named Jordan Hunter.

Who is his wife?

His wife Niele is a former WNBa player who currently is a head coach of Notre Dame Women’s basketball team. Besides, she served as an assistant coach of various other teams.

Niele played college basketball at Notre Dame and the played in the WNBA for 5 seasons with Indiana Fever, Phoenix Mercury, and Detroit Shock.

Javin’s son Jaden is a basketball player who played for the Purdue Boilermakers.

Jaden is one of the best player of his class and will reportedly be an early pick in the Draft.

Source of Earnings and Net worth

The former NFL player’s current source of income is not known. He probably is involved in some income generating works whose details are not available yet.

However, he previously played in the NFL for some season and reportedly earned thousands of dollars. There is not exact figure of his contract and career earnings.