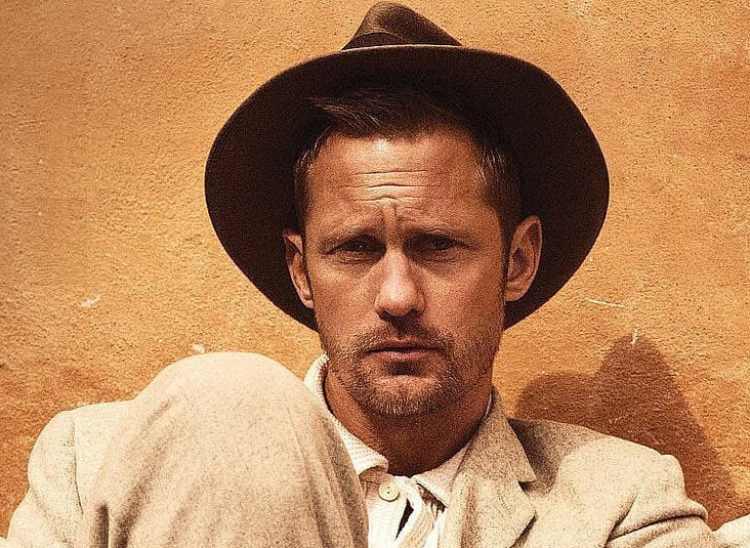 Alexander Skarsgard is a Swedish-born actor popular for his roles as Eric Northman in the vampire series True Blood and Tarzan in The Legend of Tarzan. He showed versatility in his role as Commander Stone Hopper in the movie Battleship. Similarly, his appearance as Perry Wright, an abusive husband of Celeste Wright played by Nicole Kidman in the hit HBO series Big Little Lies, earned him the Golden Globe and Emmy award in 2017. Among people, he is also known as the son of legendary actor Stellan Skarsgård.

Alexander Johan Hjalmar Skarsgård, popularly known as Alexander Skarsgård, was born in August 1976 in Stockholm, Sweden, to his mother, My Skarsgard, and his Father, Stellan Skarsgard. One of the prominent actors of his era, Stellen, has appeared in several films such as The Hunt For Red October, Pirates of the Caribbean, and Mamma Mia.

Gustaf is mainly popular as Floki in the “Vikings” and Karl Strand in Westworld. Additionally, in the past few years, his third brother Bill became famous as Stephen King Clown Pennywise in the horror movie “IT” and in other roles, such as Roman in Hemlock Grove and Zeitgeist in Deadpool 2.

Bill and Alexander together appeared in Hulu’s series King.

Alexander began his career at seven, appearing in Åke and His World, followed by few other roles until 13. Then, he left his acting career for seven years as he joined the Swedish military, serving in the anti-terrorism and anti-sabotage squad in Stockholm for 18 months.

After the actor completed the service in the military, in 1996, he left Sweden and Joined Leeds Metropolitan University in England for six months. In 1997, he started to study theatre courses at Marymount Manhattan College and Moved to New York.

The charismatic actor Skarsgard has been dating model Tony Garn, the former girlfriend of Leonardo Dicaprio, in 2020. Similarly, the Tarzan actor has had few high-profile relationships in the past.

His first well-known relationship was with the American Actress Evan Rachel Wood in 2009. They first met on the set of True Blood. The duo was together for more than one year and broke up in 2010.

Tarzan star and Oscar winner Charlie Theron were also rumored to be dating. The alleged pair was spotted several times together even though they never gave a green signal for their romance.

Similarly. in 2013, the rumors of an actor dating the award-winning actress Alicia Vakander started circulating; however, the duo shut down the allegations.

The Big Little Lies star started dating the famous British actress Alexa Chung in May 2015. The first appeared together in Brooklyn, New York, as well as Botanical Garden.

After staying in a romantic relationship for 2 years, the duo decided to quit. Finally, the on and off relationship came to an end in 2020. However, the two stars are still good friends.

The actor first started his career in minor roles in the movies. He got his first role as Kalle Nubb in Ake and His World when he was seven. His first lead role was in the Swedish film Hunden som log (The Dog That smiled) which made him famous at 13. Uncomfortable with the early fame, Alexander quit acting for seven years and joined Swedish mIlitary.

After the services in the military, the Swedish actor started his comeback journey in a minor role in Zoolander, which is his first role in an American film. In 2003, he appeared in the movie Hundtricket-the movie ( The Dog Trick). The part in the film earned him the best supporting actor nomination in Guldbagge. He was also named as the sexiest man in Sweden five times.

The actual journey in Hollywood started from the role of Eric Northman in the series True Blood.

After that, the actor appeared in several movies Straw Dogs, Melancholia, Battleship, The East, Tarzan: The legend of Jungle, along with Margot Robbie, Passing, Godzilla Vs. Kong, The Little Drummer Girl, The Humming BIrd projects, Mute, The Diary of a teenage Girl, succession, and many more.

The actor does not use social media, but you can follow @alexskarsgardlove for his latest news, movies details, recent photos, and more. His Instagram id is @rexdanger, but he is not active on social media.

Net worth | How Much Does Alexander Skarsgard Earn?

As per the Celebrity Net Worth, The net worth of Alexander Skarsgard is $14 million. Also, his salary is $275k per episode. The major source of his income is acting; besides that, Skarsgard is also into real estate.