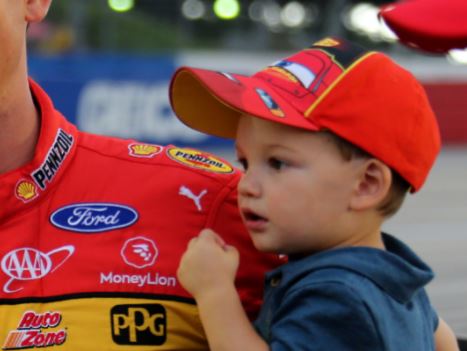 Hudson Joseph Logano is the son of an American stock car racer Joey Logano and his wife Brittany Baca.

His father Joey drives Ford Mustang for Team Penske in the NASCAR Cup Series. He recently won his second championship at Phoenix Raceway.

How old is Hudson Joseph Logano?

Hudson Joseph Logano is 4 years old. He was born on January 4, 2018. His grandparents are Deborah B. and Thomas J. Logano.

He has Italian ancestry from his grandfather.

Joey announced the birth of Hudson on Twitter with a photo of the newborn and his mom in the hospital. He wrote, “God gave us a little miracle last night!!!”.

Earlier, Joey and Brittany announced in June that they were expecting their first child whose due date was January 11.

He is the first child of the couple who married 4 years earlier in 2014.

He also has two younger siblings, a brother named Jameson Jett Logano on May 7, 2020, and a sister named Emilia Love Logano born in February 2022.

Hudson is the son of NASCAR racer Joey Logano and his childhood sweetheart Brittany Baca. His parents were friends since childhood and were engaged on November 13, 2013.

They announced their marriage in December 2014 during the offseason and tied the knot on December 13, 2014.

The couple initially struggled with pregnancy after the marriage as Brittany was diagnosed with Polycystic Ovarian Syndrome, a common health problem caused by an imbalance of reproductive hormones that can lead to infertility.

However, Brittany was successfully treated and now has three children, two sons, and a daughter.

He is the son of Deborah B. and Thomas J. Logano. His father is of Italian descent.

Moreover, he is also the youngest-ever winner in two of NASCAR’s three top divisions.

Hudson Joseph Logano is very young and is being raised well with his father’s earnings. He has been getting good care and all the luxuries.

His father Joey Logano has a net worth of $44 Million as of 2022. He earns $9.5 Million on average annually from his racing career.

He reportedly won millions after winning the NASCAR Cup series in 2018 and 2022.

Read Next: Know about Federico Valverde’s Son Benicio Valverde: How old is he?