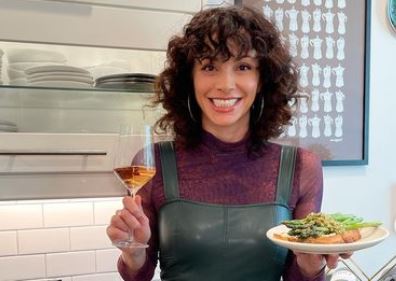 Mollenkamp has been appearing in different cooking shows on Food Network since 2008. She gained more popularity for appearing as a judge on Food Network’s Guy’s Grocery Games where Duskie Estes, Madison Cowan, and Aarti Sequeira are also a judge.

She was born to Lebanese father Jim Mollenkamp and Italian American mother Rita Leoni. She is an American by nationality and has mixed descent.

Aida’s parents separated when she was a child and was raised by her stepmother who is French. She also has three siblings including a sister named Ivy and a brother named Christophe Lindstrom.

While growing up in Southern California, she attended Rolling Hills Country Day and Chadwick School in Los Angeles. She was interested in dancing during that time but had to give up after a skiing accident.

After that, she studied at Cornell Hotel School and later attended Cornell University where she graduated with a B.S. degree in hospitality management.

Aida then enrolled at Le Cordon Bleu Paris where she received Grand Diplome in Culinary Arts.

Initially, Mollenkamp worked at different hotels and restaurants in the United States. She then worked as a Food Editor of CHOW.com from 2005 to 2009. After that, she started hosting a cooking show Ask Aida on Food Network. She also hosted FoodCrafters on Food Channel.

Moreover, she has hosted In The Pantry on Yahoo!, and Off-Menu on Tastemade. Besides, she has also published a cookbook Keys To The Kitchen.

She founded a restaurant named Salt & Wind Travel in 2015 and is also a partner at an advertising company named BORDER FREE MEDIA.

The food critic and chef Aida is married to her husband Chris Kalima. The couple is wedded to each other since February 2017. They had a honeymoon in Thailand.

She met her future partner Chris at the event in northern California in 2008 and became friends. The couple started seeing each other after a short time and was engaged after 7 years in 2015.

Her spouse is a Director of Product Management at Intertrust Technologies Corporation.

Aida’s husband supports her a lot and she also appreciates his effort. Aida frequently shared her trekking and trips photos on her Instagram @aidamollenkamp where she has more than 36k followers. In February 2021, she posted a picture thanking her husband where she wrote:

Archiving photos and came across this one of me and the hubs from back in 2017 when he came along on the very first @saltandwind group trip for moral support. So fortunate to call him my Valentine! #ijustwannaridebikeswithyou

The 41-year-old American chef and show host is a tall woman with a height of 5 feet and 8 inches. Her body weight is still unknown.

Mollenkamp has been doing well with her culinary business and TV career. She has been getting offers to host cooking shows and makes good earnings. To date, she has hosted many TV shows and reportedly earned thousands of dollars.

Besides, she has founded her own restaurant which is making a huge profit.

Moreover, Aida’s other source of income is paid partnerships on social media. She often promotes several food-related products on her Instagram. She also has a sponsorship deal with Genexa and endorses it on Instagram.

Mollenkamp, with her earnings from the restaurant, advertising agency, and TV career, has amassed a net worth of $2 million approximately.