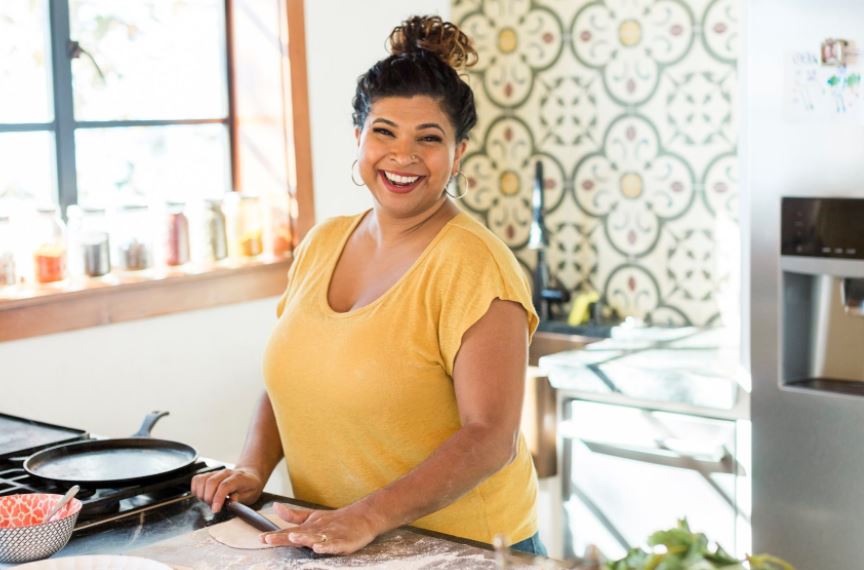 Aarti Sequeira is an Indian-American chef and TV show host who is popular for appearing on Guy’s Grocery Games as a judge alongside Aida Mollenkamp, Duskie Estes, Madison Cowan etc. She is also known for winning season 6 of Food Network’s reality television show, The Next Food Network Star.

Aarti is a television personality who has hosted several shows like Aarti Party, Taste in Translation etc. As of 2022, she is also a judge on the reality television series Halloween Wars.

Sequeira is getting success with different culinary shows and has received good responses with her Indian cuisine. Besides her professional life, who is her husband? Does she have kids?

The TV host was born as Aarti Lucica Sequeira on August 19, 1978, in Mumbai, India. She is 43 years old currently. She belongs of Indian descent and holds both Indian and American nationality. Her surname Sequeira is from Portuguese colonists who took over Western India. She was raised in an Indian Catholic family.

Her mother’s name is Rosemarie Sequeira, who is also her biggest cooking inspiration. She has two younger sisters; the younger Chris lives in Bangalore, India, while her middle sister lives in Phoenix

She grew up in Dubai and later moved to the US where she attended Northwestern University’s Medill School of Journalism and graduated in 2000.

Career as a Chef to Guy’s Grocery Games’ Judge

After her college, she worked as for CNN as a producer. Aarti then went to Los Angeles, California and attended a cooking class at the New School of Cooking in Culver City. She was certified as a professional in 2007.

Sequeira started hosting Aarti Paarti in 2008. At the same time, she also took part in Food Network’s sixth season of The Next Food Network Star. She went on to win the show with her experience of Aarti Paarti.

Aarti hosted Taste in Translation in 2013 and was invited as a judge on Guy’s Grocery Games in 2014. She frequently appears on the show till today.

Besides, she also hosted Selena + Aarti Sequeria: Friendsgiving and has been appearing as a judge in Halloween Wars since 2021.

The Halloween Wars’ judge is married to her husband Brendon McNamara. The couple met while attending Northwestern University in 2000 and tied the wedding knot after dating for three years in 2003.

Aarti and he husband together hosted the online show Aarti Paarti.

Likewise, Sequeira and her husband Bendon are parents’ to two children. They gave two daughters named Eliyah and Moses Marigold. Aarti suffered from postpartum depression after the birth of her children and is now involved is Post Partum Support International since then.

The family of four now lives in Los Angeles, having moved from New York to live together.

Aarti Sequeira Net worth and Salary

The Indian American chef and TV personality is now a popular name in the culinary world. She has been hosting shows frequently through which she earns a good income. As a judge on Guy’s Grocery Games, she makes around $2,000 per episode.

She reportedly received prize money of $10,000 after winning The Next Food Network Star. Besides, she also earns money from paid partnerships with several products through Instagram and other social media.