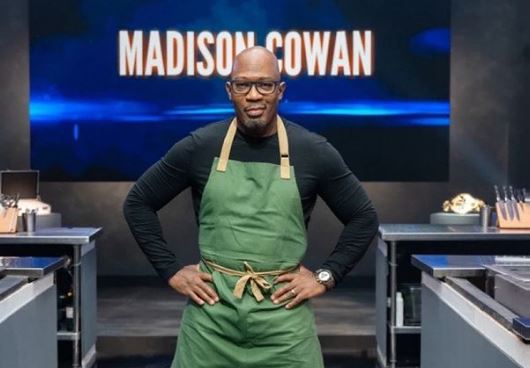 Madison Cowan is a British-American chef and TV personality who is one of the judges on Food Network’s Guy’s Grocery Games alongside other chefs like Aida Mollenkamp, Duskie Estes, Aarti Sequeira, etc.

Cowan became popular after winning the first season of Food Network’s Chopped. He has appeared on BBC America’s travel series No Kitchen Required and was one of the judges on Extreme Chef which aired on Food Network.

Cowan was born in South London, United Kingdom, and holds both British as well as American nationality. He is of mixed descent as his ancestors are the roots of London, Jamaica and Detroit.

His mother is his inspiration to choose a career in culinary. He started cooking at the age of 14.

She (mother) made certain I knew my way round the kitchen and would never depend on anyone for a meal. Sage advice I now impart to my own child.

His parents divorced when he was young and he also learned coking from his stepmom.

Cowan is already a married man. He has tied the wedding knot with his wife Helen who is Danish. The couple reportedly dated for around four years before finally marrying.

He also has a daughter named Celia. The TV personality loves his daughter a lot and frequently shares happy moments with his daughter on Instagram with the handle @madisoncowan.innit.

Earnings, Prize Money, and Net worth

The British-American chef is active in culinary business and has made a good fortune. Working from various restaurants, he earned a good income.

Madison has appeared in many shows as a host and judge. He also gets a fair paycheck for his service.

Besides, he has also competed in cooking shows and received thousands of prize money. He is the first Grand Champion of Food Network’s Chopped and took home a $50,000 grand prize in 2010.

Madison Cowan’s net worth is not disclosed but could be around $500,000.

Madison Cowan has actively worked with Alzheimer’s Association and is a speaker for the cause. It is because his father passed away due to the disease.

He was also involved in the event ‘The Alzheimer’s Association Walk to End, Alzheimer” and has raised voice in support of the victim.

One thought on “GGG’s Judge and Chef Madison Cowan’s Wiki, Wife, Net worth”