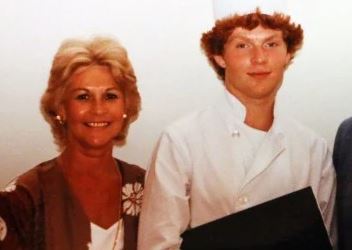 Dorothy Flay was the mother of Bobby Flay, an American celebrity chef, restaurateur, and reality television personality. She died at the age of 86 in 2018.

She was married to Bill Flay and lived most of her life in New York. Bobby is their only child.

Mrs. Flay was born Dorothy Barbara McGuirk on May 20, 1931, in Brooklyn, New York. Her parents were John McGuirk and Pauline McGuirk. She grew up in Ridgewood, Queens in New York

She is a Hiberno American woman as she is the third generation of Irish Americans.

During most of her professional career, she worked as a trademark specialist in the pharmaceutical and cosmetic industries in New York City.

Dorothy Flay married her husband Bill Flay in the early 1960s. Unfortunately, we don’t have further details about their wedding and relationship.

They welcomed their only son named Bobby Flay in 1964. After some years of marriage, the couple couldn’t continue their relationship and divorced.

She then raised her son as a single mother and lived a single life since her thirties.

Dorothy used to spend her vacation on New Jersey shore in Sea Girt and Spring Lake and later moved permanently after her retirement.

Her only son Bobby Flay is an American chef, restaurateur, and reality television personality. He owns several restaurant franchises like Bobby’s Burger Palace, Bobby’s Burgers, and Amalfi and is an executive chef.

As a TV star, he works for Footb Network and has won four Daytime Emmy Awards.

Bobby was born Robert William Flay on December 10, 1964, in New York City, the U.S. He studied at French Culinary Institute.

He belongs to Irish American ancestry and grew up in a Catholic family.

He has married three times. His first wife is Debra Ponzek, an American chef. They were married from 1991 to 1993.

He then tied the knot with his second wife Kate Connelly in 1995. They divorced after three years. The couple shares a daughter named Sophie Flay.

After his divorce, he was in a relationship with Heléne Yorke from February 2016 to early 2019.

Bobby was a Tough Child

Dorothy faced difficulties raising her son Bobby as a single mother as he was a very tough kid. She had a job to do and also look after her son.

The chef also recalled his childhood and said:

And I’ll just say this: I wasn’t the easiest kid to raise, culminating with dropping out of high school after 9th grade. Still, when I finally found some focus and got a job, my mother wound up being my greatest cheerleader. I knew from my experiences as a 12-year-old that Mother’s Day had to be planned, no matter what.

Her granddaughter is a journalist and works as a community reporter for ABC7.

She was born on April 16, 1996, and is 26 years old as of 2022 She studied journalism at the University of Southern California.

She had been living there permanently since her retirement. She is now survived by her husband Bill, son Bobby, and granddaughter Sophia.

Many people including her close friends, neighbors, and relatives paid tribute to her and wrote that she was an amazing person.