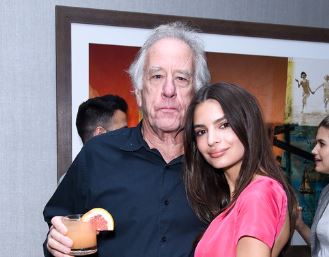 John David Ratajkowski, a painter and art teacher, is the celebrity father of supermodel Emily Ratajkowski. His wife is Kathleen Balgley, who is a lecturer.

His only daughter Emily is a famous model and actress. Likewise, she is also an activist, feminist, social media personality, and entrepreneur as well. On top of this, she has walked the runway for Versace, Miu Miu, Marc Jacobs, etc.

John was born and raised in a Jewish family to Joseph T. Ratajkowski and Mary Lee Hays. He was born in 1946 in San Diego, California, and holds American nationality.

JD Ratajkowski is 76 years old as of 2022. Born to a Polish father and Irish mother, he comes from a mix of Polish and Irish ancestry. His father served in the navy.

He grew up in the seaside town of Coronado, California, and was interested in drawing from his childhood. He used to draw anything he saw.

Besides, he also had a passion for painting, sculpture, ceramics, printmaking, and lithography.

His passion became his profession and John taught art in North County, San Diego. Besides, he has done more than 25 exhibitions in Europe and the US.

John met his future wife Kathleen Balgley in the mid-1980s and dated for some time. They had an on-and-off kind of relationship but married after his wife Kathleen was pregnant with their daughter.

The pair became the parents of their daughter Emily Ratajwoski on June 7, 1991, in London, England. She has grown up to become a famous model and actress now.

Emily wrote in her book My Body that she was the glue that held her parents together.

“I knew that my parents had been on again, off again for years before my mother became pregnant with me and they decided to get married. … I understood that even before I was born my existence was the essential glue of their relationship.”

The family of three now resides in Encinitas near San Diego, California.

John’s wife Kathleen was born in 1952 in Israel and is 70 years old. She comes from Israeli-Irish descent.

Balgley has a Bachelor’s degree from the University of California and also completed her Ph.D. in Literature from the same university.

She even taught American literature in Poland from 1987 to 1988 on a Fulbright scholarship after her graduation.

After returning to the US, she started working as an Associate Professor of English at California State University and also worked in community colleges.

Know about his daughter Emily Ratajkowski

She was born to Kathleen Balgley and John David Ratajkowski. She doesn’t have siblings.

The model, author, and swimwear founder is of Polish-Israeli descent but also has English, Irish, and German ancestry.

She was raised in Encinitas near San Diego, California, and attended UCLA but dropped out after a year to work as a full-time model.

Apart from her career as a model, she has starred in movies and TV series. Her movie credits include Gone Girl, I Feel Pretty, Welcome Home, etc.

Talking about her relationship and affair, Emily was married to actor and producer Sebastian Bear-McClard. They tied the wedding knot after dating for some weeks on February 23, 2018, at a New York City courthouse wedding.

They together share a son named Sylvester Apollo Bear born on March 8, 2021.

However, after a year in July 2022, Emily filed for divorce. Some sources revealed that her husband was cheating on her which was the reason behind their split.

Earlier, Emily was in a relationship with Jeff Magid from December 2014 to early 2018.

What is John David Ratajkowski’s net worth?

The painter and art teacher John David has an estimated net worth of $1 Million. He reportedly makes good money from his painting sales and teaching jobs.

Moreover, he also has done exhibitions in Europe and America.

His daughter is worth $8 Million which she earned from her modeling and acting career. Moreover, she also owns a swimwear brand Inamorata.