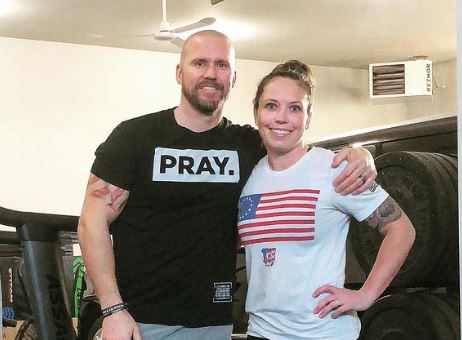 His wife is best known for competing on the American reality show Survivor and is also the winner of the 34th season, Survivor: Game Changers in 2017.

Wardenburg and his wife Sarah have been married for more than a decade and also share a son aged 8. His wife Sarah has competed in the three editions of Survivor where Wyatt also made some TV appearances.

Where did Wyatt Wardenburg and Sarah Lacina meet?

Wyatt Wardenburg attended Wartburg College in Waverly where he first met his future wife Sarah Lacina. Connected with a similar passion, they started dating each other.

Wyatt and Sarah relocated to Cedar Rapids after their graduation in 2006 and started their career in law enforcement.

They both started working at Cedar Rapids Police Department and married after a couple of years. Unfortunately, we don’t have any details about their wedding.

Does Wyatt Wardenburg have Kids?

Wyatt Wardenburg has a son named Knox with his wife Sarah. Knox is 8 years old and recently celebrated his 8th birthday on August 22, 2022.

Despite the busy schedule, the couple manages time for their youngster and spends time together.

On his 6th birthday on August 22, 2020, Sarah wished him through Instagram and wrote:

Happy Birthday, Knox! I can’t believe you’re 6 today. You are one special little boy. What a year buddy, lost your first tooth 🦷, flew to Fiji 🇫🇯, on an episode of @survivorcbs, caught a lot of fish 🎣 and so much more. Mom and dad love you so much. Hope you have the best day.

The family of three currently resides in Marion, Iowa. Wyatt and his wife also take their son to the gym to do exercise at such a young age.

Sarah Lacina is a TV personality, police officer, and MMA fighter. She was born on July 9, 1984, in Muscatine, Iowa, U.S.

Her parents are Lorrie and Ronald. Her mother worked as a law enforcement officer which attracted Sarah to follow in her mother’s footsteps.

Lacina studied at Muscatine High School where she competed in four different sports. She then studied at Wartburg College and received her Bachelor’s degree in Social Work in 2006.

Sarah, shifted to Cedar Rapids and briefly worked as a resource officer at Kennedy High School in Cedar Rapids.

After that, she joined the police as a police investigator where a police officer encouraged her to join MMA.

She competed professionally in 2010 and won the fight via submission.

Lacina took part in Survivor: Cagayan, the 28th season of Survivor but was placed 11th. She then returned to the show in the 34th season, Survivor: Game Changers, and became the winner.

Moreover, she also competed in the 20th season, Survivor: Winners at War, and stood fourth.

Moreover, she even appeared in the series The Challenge: USA on CBS.

Wyatt Wardenburg doesn’t seem to be available on other social media except for Instagram. His Instagram handle is @wardywade where he has more than 500 followers.

On his Instagram profile, he has mostly shared photos of his gym and workouts.

His wife Sarah also has Instaragm @sarahlacina. She is a TV star and social media personality with more than 50k followers.

She gained supporters after appearing in Survivor and winning the show.

Wyatt is a gym freak and has maintained his body perfectly well. He has a height of 6 feet and 2 inches and weighs around 90 kgs.

Likewise, his wife has also maintained her body with regular exercise and gym. She also competed in MMA so she is very much aware of her health and body.

Wyatt Wardenburg Net worth and Salary

On the other hand, his wife also earns about $60,000 as she is also a police officer. However, she makes additional income from her TV appearances and MMA fight.

After winning the Survivor in 2017, Sarah earned prize money of $1 Million. In addition, she also earned $40,000 after finishing 4th and the final jury member in 2020,

Moreover, she won many other cash prizes from Survivor. Sarah Lacina’s net worth as of 2022 is around $2 Million.