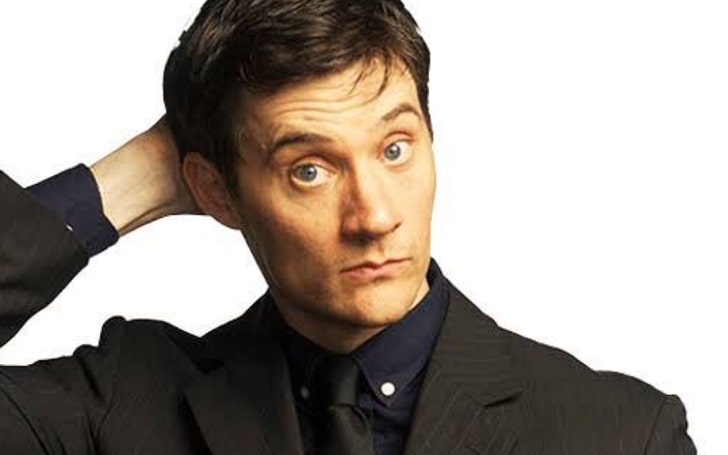 A native of Brisbane, Queensland, Ed Kavalee is known for his lightning-fast comedy and improvisation talents who has worked extensively in Australian television and radio for over a decade. Besides, Kavalee is not only successful in his professional life but also in his personal life. The co-host of Sydney’s Hughesy, Ed & Erin married writer Tiffiny Hall with whom he has a son.

Edward Robert Kavalee was born in Brisbane, Queensland, Australia, on June 30, 1979, making his age 42 years as of early 2022. The Australian comedian’s father, Charles Keith Hyland, was 65 years old when Ed was born. In an interview with Daily Mail, Ed revealed that he never met his biological father.

So, his mom raised him as a single parent. Furthermore, Kavalee was closer to his mom, who had done a fantastic job raising Ed. Apart from that, Kavalee attended Screenwise, where he studied 12 Month Intensive Showreel Course.

Kavalee began his career just at the age of 14 by working at a small video store for over eight years. The graduate of Screenwise has hosted several radio shows. He worked in Thank God You’re Here. Likewise, he is co-host of Sydney’s ‘Hughesy, Ed & Erin’ on the Hit Network’s weekday breakfast show.

Not only that, but he is a popular regular member of Network 10’s Have You Been Paying Attention. The talented comedian has been an integral member of ‘The Grill Team’ at Triple M in Brisbane. Also, Kavalee has written and produced two tele-features named Scumbus and Border Protection Squad.

Apart from that, Ed also has an impressive portfolio as an actor. He has more than 19 credits as an actor, and his notable roles can be seen in Newstopia, Chandon Pictures, The Bazura Project, It’s a Date, Pacific Heat, Teenage Rangers, and Fisk. Throughout his career, Kavalee has worked with various professionals, including Jessica Napier.

The 42 years old comedian is happily married to his wife, Tiffiny Hall. The romantic couple has been together with each other for more than seven years. The power duo walked down the wedding aisle in 2014. Meanwhile, the ceremony was held privately in the presence of their friends and family.

After three years, Tiffiny and Ed decided to begin their family. And in September 2017, they welcomed their first child, a son named Arnold. And in December 2021, the lovely duo announced that Tiffany was pregnant with their second child.

Talking about Ed’s wife, Tiffiny is an Australian personal trainer. She is also a talented author, journalist, and television personality. The 37 years old Hall has appeared on various shows, including The Biggest Loser Australia: Singles.

The prominent Australian comedian has more than a decade-long dedicated career in the entertainment industry. With his multiple profession as an actor, comedian, writer, and producer, Kavalee indeed makes a huge sum of money. According to Idol Net Worth, his net worth is estimated at $3 million.

His income will surely increase in the future as he is still working actively. Not to mention, the average salary of a comedian in Australia is $71,883. So, Kavalee might make in the same range with his profession. Furthermore, his earnings not only come from his work on the big screen but also from endorsement deals. As per Influencer Marketing Hub, his payments from a sponsored post on Instagram are $214.5 – $357.5.