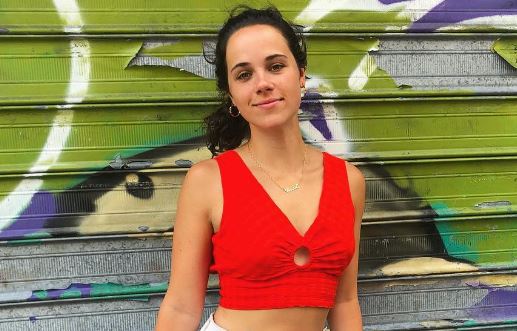 Caroline Couric Monahan is a social media personality famous for being the youngest daughter of Katie Couric.

Katie is an American journalist, presenter, producer, and author. She is the founder of Katie Couric Media, a multimedia news and production company.

Caroline is currently starting her career as a host for her show, “The Carrie Show”. She is now holding an open audition for it.

Let’s scroll through the article to learn more about Caroline’s wiki, bio, and other related things.

On January 5, 1996, Caroline Couric Monahan was born in New York City to her wonderful parents Katie and Jay. Caroline’s pet name is “Carrie”.

Carrie is now 26 years old and teaches English in Spain for some time.

Likewise, She was born and raised as a Christian alongside her elder sister Elinor Tully Monahan. She also goes by the name of Ellie.

Since February 2020, Carrie works as a producer at Reuters, where she disproves the false information that is gaining popularity on social media.

Caroline seems to be a straight-A student because she scored a 4.0 GPA at Trinity School in New York in 2014, and In 2018, she was enrolled at Stanford University and earned a Bachelor of Arts in American Studies and French with a 3.994 GPA.

Likewise, she has also written for Reuters three times, most recently for an article published in December 2019 headlined “Against machines, how can Generation Z compete? accentuate the human element,” and started working as editor-in-chief Steve Adler’s research assistant in September 2019.

Moreover, prior to working at Reuters, Monahan interned in public relations at Room to Read, researched at Ark Media, and as the essays editor at West Magazine at Stanford University.

When she worked as a communications intern at the Southern Poverty Law Center, her dedication to social justice was clearly evident.

By responding to media queries, gathering and analyzing data on racial profiling by law enforcement, and authoring the “manual for SPLC on Campus program, used by student clubs around the country,” she aided the civil rights organization.

Caroline was born to Katie Couric and Jay Monahan.

In 1989, Katie and Jay walked down the aisle. They have two daughters together.

On July 23, 1991, the couple gave birth to their first child, Elinor Tully Monahan in Washington DC.

Apparently, Jay was a lawyer and NBC News legal analyst. Jay was diagnosed with Stage IV colon cancer and in January 1998, he died of cancer at the age of 42.

Caroline was just 1 year old when her father died. Likewise, her sister Ellie was four years old when Jay died.

After Jay’s death, Katie raised her children all alone and after some decades later in 2014, she went on and married John Molner.

Before marrying John, she dated him for two years.

They tied the knot in a small, private ceremony at her home in The Hamptons.

Furthermore, let’s know more about Katie Couric. So, who is Katie?

On January 7, 1957, Katie was born in Arlington, Virginia, to Elinor Tullie and John Martin Couric, Jr.

Her mother was a homemaker and her father was a public relations executive and news editor at The Atlanta Journal-Constitution and the United Press in Washington, D.C.

Katie is an American journalist, famous for a daily newsletter, Wake Up Call.

All three of the Big Three American television networks have included Couric as a host, earlier in her career, she worked as an assignment editor for CNN.

She made an appearance as a guest host for the game show Jeopardy in 2021, becoming the first woman to ever host the main American version of the program.

Along with her work in television journalism, Couric also presented Katie, a syndicated daytime chat program created by Disney-ABC Domestic Television, from September 10, 2012, to June 9, 2014.

In addition, She co-hosted Today, served as anchor of the CBS Evening News, and was a correspondent for 60 Minutes, among other prominent presenting positions.

The Best Advice I Ever Got: Lessons from Extraordinary Lives, written by Couric in 2011, became a New York Times best-seller. Couric was admitted to the Television Hall of Fame in 2004.

You can find him on Instagram as @carriecmonahan. She has over 13.2 K followers and follows over 2.1 K different accounts that include various social media personalities, actors, etc.

You can also find her on LinkedIn as @Carrie Monahan.

On the other hand, her mother Katie is also available on Instagram as @katiecouric. She has over 1.5 Million followers as of 2022. Likewise, she also follows over 3.5 K different accounts.

How rich is Carrie Monahan?

Even though Carrie is in a limelight for her entire life. Her net worth is not available to the general public.

However, she is financially independent and definitely earns five figures.

On the other hand, Katie is able to accumulate a total net worth of $75 Million as of 2022. Her major source of income is her journalism career, and also as a producer, author, etc.

Some facts about Caroline Couric Monahan