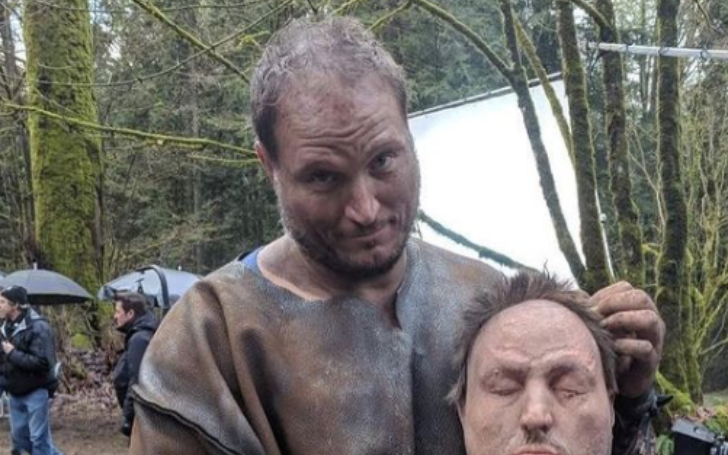 Where Was Andre Tricoteux Born? How Tall Is He?

Andre Tricoteux was born in Yellowknife, Northwest Territories, Canada. His exact date of birth is yet to be disclosed. However, some sources have claimed that he was born in 1961.

The stuntman stands tall at the height of 6 feet 11 inches (2.1 m) and is 59 years old as of writing this article. He holds Canadian citizenship and is a former professional wrestler.

Net Worth Is In Million – Television & Movies Credits

According to the website erieri.com, the average salary range for actors in Canada is between $70,239 and $122,466 per annum. So he might be earning in a similar range.

In 2011, the actor first appeared as Issac in the TV film To the Mat. The following year, he appeared in the television show True Justice and film The Movie Out Here.

Some of his early TV and movies credits include Health Nutz, Arctic Air, Continuum, Ice Soldiers, and Bad City. He acted and did stunt work in the ABC drama series Once Upon a Time in 2013.

Warcraft actor played the supporting role of Cheif in The CW crime drama series iZombie from 2015 until 2017. Likewise, he was cast as Savitar in The CW drama series The Flash from 2016 to 2017.

Andre has also done stunt performances in various TV and films such as Legends of Tomorrow, See No Evil 2, and Seventh Son. Currently, he plays Icy Bob in season two of the thriller series Snowpiercer.

Besides his acting and stunt, he is a former professional wrestler as well. He was an IWA World Heavyweight Champion and three times IWA World Tag Team Champion.

Deadpool stuntman Tricoteux appears to be a married man. He is married to an artist Marta Rozadarta Tricoteux.

In 2017, the couple became parents of their first and only child, Nolan Zigmunt Tricoteux.

On November 24, 2018, the stuntman shared his happiness, revealing that his son turned one on his Instagram @andretricoteux. He mostly posts about his upcoming projects and promotes his work on his social media.