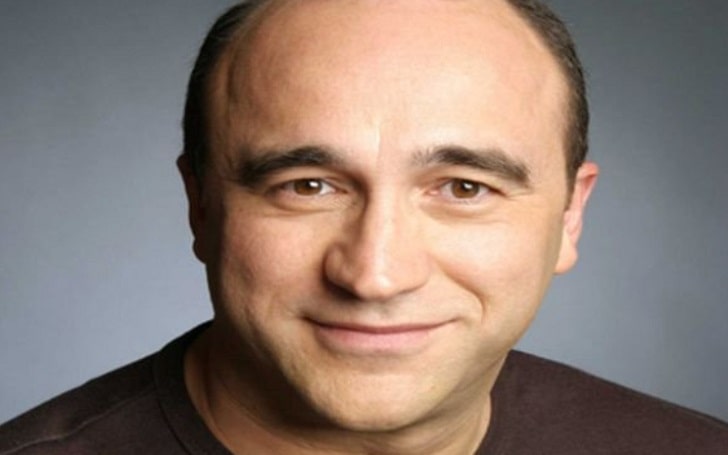 A veteran Australian actor since the 80s George Kapiniaris already has an on-screen impact of more than 3 decades. Among more than 33 acting credits, the world still knows him for portraying Memo Hatzidimitropoulos in Acropolis Now (1989-92).

Kapiniaris went from a small-time theater artist to a TV screen phenomenon; still, his love for stages remains intact. Currently, the Australian-born tours OZ with Joe Avati, Tahir & Rob Shehadie. Not to mention, such immense fame bestowed him a considerable fortune.

Where Is Georga Kapiniaris From? Age & Family Background?

Born on February 27, 1961, George Kapiniaris is 61 years old as of 2022. He was born in Melbourne on Lonsdale street. The actress spent most of his early days in the heart of Melbourne’s Chinatown.

The Australian actor has Greek ancestry; his mother was from Katerini in Makedonia, while his father was from Kalamata in the Peloponnese. And upon returning to Richmond, his parents would often take him to Greek cinema that possibly honed his Greek character portrayals.

The talented figure, George, has been making people laugh for decades. He conceived his famous style of ethnic comedy at Rusden College in 1985. After completing his education, Kapiniaris began his theatrical career. In the 1980s, he appeared in the stage show Wogs Out of Work with Nick Giannopoulos.

Later, he began getting involved on the big screen and made his television debut by appearing in the television series, The Fast Lane, released in 1986. The following year, he starred in another tv series called Willing and Abel. Furthermore, the Sentiments cast got his breakthrough in 1987 after landing the role of Dimitrios’ D.J.’ Lonniadis in The Flying Doctors.

Since then, he has worked in numerous television series that have done well in the industry. His notable credits are Acropolis Now, Pig’s Breakfast, Russell Gilbert Live, Blue Heelers, Pizza, Stingers, and many more. His recent television appearance can be seen in Fat Pizza: Back in Business. Kapiniaris has starred in Neighbours along with Tiriel Mora and Jordan Patrick Smith.

On the other hand, the multi-talented George has also starred in films like Alex and Eve, Big Mammas Boy, Thunderstruck, Bloody Footy, Housos The Movie, and many more. Moreover, the Offspring cast is still active in the industry and is working on upcoming projects.

Who Is George Kapiniaris Married To? More On Personal Life!!

The Fancy Boy star is a married man who leads a happy life with his beloved wife, Fotini Kapiniaris. Together the couple also has a son which he rarely features on social media. However, George and Fotini live private life. So, there is very little info about his marital life.

Apart from that, George is not involved in extra-marital affairs, and there is no news regarding his past relationships. So, we can say that he is living a happy life with his wife and children.

A dedicated dad & husband aside from being an entertainer, Kapiniaris is active on social media, especially on Instagram. His IG handle goes by @georgekapiniaris & has more than 14.4K followers where he often updates his venture & personal life aspects.

How Much Is Geroge Kapiniaris Net Worth In 2022?

Throughout his on-screen career of more than 30 years, Kapiniaris already has more than 30 credits under his belt. The Housos alum made a decent sum with his fabulous T.V. career, while his film & theater appearances also added considerable earnings. And some online source estimates his net worth to be around $1 million to $5 million.

Meanwhile, the average salary of an actor in Australia is $76,975 per year or $39.47 per hour. So, George might have earned in the same range with his long-term career as an actor. Likewise, a comedian in Australia earns around $71,883. So, by doing stage performances, Kapiniaris must have amassed a fair profit.