Who is Jazmyn Simon? Everything about Dule Hill’s Wife 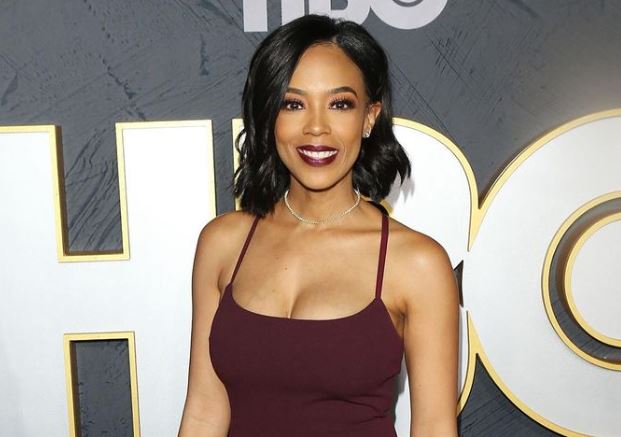 Jazmyn Simon is an American actress who is famed for portraying in the Netflix series Raising Dion. She also had a major role in the American comedy-drama series Ballers which aired from 2015 through 2019.

Jazmyn’s fame skyrocketed after she married Dule Hill in 2018. Her husband Hill is an American actor. Know about her married life, children, family, and more in detail.

Who is Jazmyn Simon Married to?

The actress is married to her Ballers co-star Dule Hill, who is also an actor. The couple first met on the set of Ballers in 2015 and began their relationship. Jazmyn revealed the moment she first met her future partner in an interview with Home & Family. She said:

“I met Dulé at lunch, I was supposed to be in Miami for two days to shoot the Ballers pilot, and my two days turned into two weeks because I was at the end of the second day and my scene got bumped. I packed two days worth of clothes, and I was there for two weeks, and one day I was so bored towards the end of the two weeks and I went to lunch, I called and said, ‘Can someone pick me up for lunch on set?’ So they come and pick me up.

And Dulé had just traveled in for that one day because he was doing a play on Broadway called After Midnight, so he was only off on this Monday. And so he came and I went to set and I saw him, just me and him at the end of the table, and I was like, ‘Oh, I know you. You’re Dulé!’ And I went, and we exchanged numbers, and the rest is history.”

After two years of dating, Jazmyn and Dule were engaged on April 14, 2017. Hill proposed to his girlfriend with the marriage proposal in front of a hot air balloon ride in Ojai, California.

“He’d planned to propose on a hot air balloon ride but it was too windy, so he proposed in front of the balloon instead,”

How was their wedding?

The pair tied the wedding knot after a year of engagement on April 212018. The elegant wedding ceremony was held in the gardens of Las Capuchinas in Antigua, Guatemala which had the attendance of many people including their friends, family, and relatives.

“I felt like I was in a dream—I’d planned the wedding for a year, and there I was, standing across from the man of my dreams and reciting vows that would make us husband and wife. I wish I could relive it!”

At her wedding, Simon wore a mermaid-style Berta gown while her spouse Hill appeared in a classic Ralph Lauren tuxedo with a black bowtie.

The pair went to the Maldives for their honeymoon.

The Ballers’ couple is now raising two children. The elder child, a daughter Kennedy Irie Hill is from Jazmyn’s previous partner whom Hill adopted after their marriage.

Kennedy is now 17 years old and plays volleyball at Northwestern University. There is no information about the father of Simon’s daughter. Kennedy is currently dating Sonny Heyes.

The couple welcomed their own child, a son named Levi Dulé Hill on May 10, 2019.

Who is Dule Hill?

Hill is an American actor popular for starring in the NBC drama television series The West Wing. He even received an Emmy nomination for Outstanding Supporting Actor in a Drama Series.

His other notable works include Psych, Suits, the 2021 remake of The Wonder Years, Muppet Babies, Ballers, etc.

Her husband was previously married to actress Nicole Lyn in 2004. The couple didn’t have any children in their 8 years of married life so, they split in 2012.

The Raising Dion star has had very few lead roles in her decade-long career. She is still active in the industry and has been earning a decent paycheck for her work.

Her husband Dule Hill has been acting since 1985 and has earned well from his career. His net worth could be around $1 Million in 2022.

Simon was born on December 30, 1980, in San Francisco, California, U.S. She is 41 years old and holds an American nationality. She belongs to the African-American ethnicity.

Jazmyn Simon is 5 feet 5 inches tall and weighs 55 kg. She is active on Instagram with @jazmynsimon where she has around 116k followers.