Who is Danielle Egan? Know about Giovanni Reyna’s Mother and Former Soccer Star 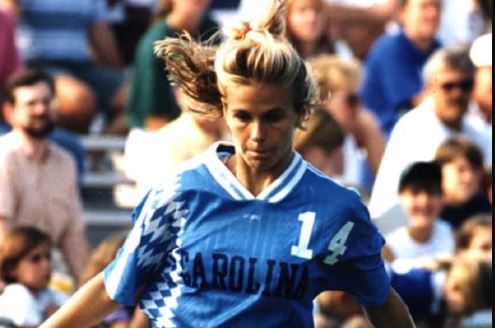 Egan is married to former footballer Claudio Reyna and has four children including Giovanni Reyna.

Her famous son Giovanni is an American professional soccer player who plays as an attacking midfielder or winger for the Bundesliga club Borussia Dortmund and the United States national team.

Let’s scroll through the article to know more about Danielle’s personal life and many other details.

On August 28, 1973, Danielle was born in West Islip, New York, United States to her wonderful parents whose identity is not available on the internet.

She comes from Irish descent. She holds American citizenship and her zodiac sign is Virgo.

She even competed for the North Carolina Tar Heels alongside Mia Hamm, Tisha Venturini, and Kristine Lilly under head coach Anson Dorrance.

Egan made six appearances for the senior American women’s team in 1993, all of which were starts. On July 7, 1993, she scored one goal, the opening one in a 6-0 victory over Australia in Hamilton, Ontario.

Who is Danielle Egan’s Partner?

She tied the knot with Claudio Reyna, a then-player for the American men’s national soccer team, in July 1997, two weeks after the United States men’s team’s World Cup qualifier against El Salvador.

On July 20, 1973, Claudio Reyna was born in New Jersey, United States. He is an American former professional soccer player and current sporting director of Austin FC.

He is also a former midfielder and was the captain of the United States men’s national team before retiring from international soccer following the 2006 FIFA World Cup.

He is one of the greatest players the United States has ever produced. Reyna last competed for the Major League Soccer team New York Red Bulls, serving as team captain.

On January 15, 1994, Reyna played in his debut international match for the United States against Norway.

Reyna additionally represented the United States at the Olympics in Barcelona in 1992 and Atlanta in 1996. Because he led the American national team, he was occasionally referred to as Captain America in Great Britain.

Reyna led the squad in its maiden season in 2021 alongside his former teammate from the US national team, Austin FC head coach Josh Wolff. On November 21, 2019, Reyna became the Sporting Director of another MLS expansion team, Austin FC.

The former soccer players have been married for more than two decades now. They seem to be so much in love with each other.

They also have 4 children together.

Likewise, In 2002, they gave birth to Giovanni Reyna, a famous soccer player. He is named after Reyna’s good friend and former colleague at Glasgow Rangers, Giovanni van Bronckhorst

And then they later had two kids, Joah and Carolina.

There is no information regarding her other children.

Moving further about Giovanni, he made his debut in Soccer in 2019. Reyna made his Bundesliga debut for Borussia Dortmund on January 18, 2020. He entered the game as a substitute in the 72nd minute of a 5-3 victory over FC Augsburg.

In a 3-0 victory over Copenhagen on September 6, 2022, Reyna made history by becoming the first American player to register two assists in a Champions League game.

Furthermore, Reyna obtained his first call-up to the senior United States team for games against Wales and Panama in November 2020 after competing for the country at various youth levels.

A day before turning eighteen, Reyna made his senior national team debut against Wales on November 12, 2020. Reyna started the subsequent match, a 6-2 friendly triumph over Panama, and scored his first goal as a senior from a free kick.

Through his father, Reyna is of Portuguese and Argentinean ancestry; through his mother, he is of Irish-American ancestry.

Even though Danielle Egan has been in the public eye for a long time, she has kept her personal life a mystery so much so that her Instagram profile is private.

She does not let outsiders in her personal life. Whatsoever, you can find her on Instagram as @dreyna73. She has over 660 followers and follows over 900 different accounts. She has also made over 810 posts on her Instagram profile as of 2022.

On the other hand, Danielle Egan’s son Giovanni has over 506 K followers on Instagram and follows over 329 different account that includes various social media personalities, athlete, actors, family, and friends.

You can find him on Instagram as @gioareyna. He has made over 91 posts.

How rich is Danielle?

The former Soccer player has a total net worth of $1.5 million as of 2022. Her major source of income is her Soccer career and brand endorsements.

The offensive midfielder signed a contract with Borussia Dortmund in November 2020 that will pay him a staggering 1.6 Million Euros (1.4 Million Pounds) annually.

Some facts about Danielle Egan