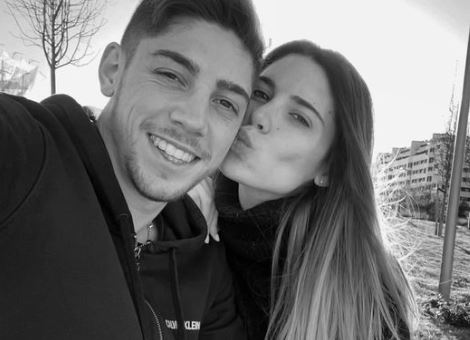 Mina Bonino is an Argentine journalist and TV presenter, best known as the girlfriend of Federico Valverde, an Uruguayan football player. Bonino is also popular as the host of the TV program Debo Decir.

Her boyfriend Valverde currently plays as a midfielder for the Spanish club Real Madrid. The pair hasn’t married yet but share a child.

The Uruguayan player has been performing brilliantly in recent days and is often regarded as one of the best players. He is known for his quick speed, tenacious and tireless nature, long-range goals, and his ability to play at any position.

The Argentine TV sports journalist was born on October 13th, 1993, in Argentina. Her parents are Argentinian and she also has a sister Paulina Bonino.

Originally from Quilmes (Argentina), she studied Journalism at the University of Buenos Aires and specialized in sports and television.

She is 29 years old and is 5 years older than her boyfriend Fede.

Bonino might have a degree in journalism but the details of her education and is still unknown. She follows Christianity. Mina hasn’t shared further details about her personal life.

She gained fame as the announcer of the TV program Debo decir where she served from 2016 to 2017.

How did she meet Fede Valverde?

Mina Bonino met Fede Valverde for the first time in late 2018. They first started their conversation on Instagram as strangers.

They soon became close friends and Valverde invited her to Spain to watch his game against Barcelona.

Bonino traveled to Spain to meet and they soon began dating. The duo came public with their relationship in May 2019.

After some time, she also shifted to Spain and started living with him. The couple hasn’t married yet.

Mina Bonino and Fede Valverde haven’t married but share a child together.

They were blessed with a son named Benicio Valverde, on February 20, 2020. They frequently share photos of their child on social media.

After 14 hours of labor, with the last three very difficult, I am convinced that one draws strength from where one does not have when bringing a child into the world, and all the pain was worth it.
Thanks thanks@bmummadridJackie and Abi because nothing would have been possible without their support, they were unconditional and I am happy to have found them (in their stories you can see how the delivery was developing during the day)
On 02/20/2020 at 00:02 Benicio was born Valverde in Madrid for a very difficult but successful natural birth ❤️ We love you son. I hope you know how expected you were and all the desire we had to meet you. To you dad, who are my partner, my husband, who was unconditionally by my side and while I was pushing you told me ‘let’s go up, toothless, it’s coming out’
Here is our award and this is your best goal

Valverde also considers his son as his whole world and loves him unconditionally. While he is not on the ground, he spends time with his partner and son.

Bonino and Valverde spend a good time with their son.

Mina Bonino’s Net worth and Salary

Mina is currently busy raising her son. Earlier, she worked as a journalist and TV presenter and earned a good salary.

She reportedly doesnt have any earning source these days. Her partner Fede Valverde’s salary is expected to be €160,000 a week and earns €640,000 per month.

Read Next: Who is Sasha Attwood? Know about Jack Grealish’s Girlfriend