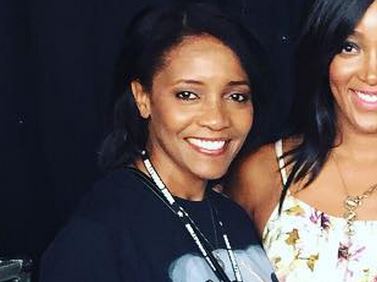 Phyllis Ann Roddy is an American citizen, best known as the mother of an American country music artist Mickey Guyton. Her daughter is popular for her debut song “Better Than You Left Me” released in 2015. Besides, she has also been nominated for several awards.

Where is Phyllis Ann Roddy now? Know about her husband, daughter, and more.

Phyllis Ann Roddy is married to her husband Eugene Guyton, who is an engineer by profession. The couple reportedly tied the knot in the late 1970s and has four children including their second child, a daughter named Mickey Guyton.

Phyllis and her spouse Eugene belong from an African ethnic background. They had to move from place to place due to her husband’s profession, during which they faced a lot of racial discrimination.

Phyllis is the mother of popular celebrity child Mickey Guyton. She is a country music artist who gained fame with her debut single “Better Than You Left Me”. She even received a nomination from the Academy of Country Music Awards. Her second single “Black Like Me” was about her experience as a Black woman, for which she received a nomination in the Best Country Solo Performance category.

Mickey was born Candace Mycale Guyton on June 17, 1983, in Arlington, Texas, the U.S. During her childhood, she faced a lot of discrimination in public school due to which her parents admitted her to the private school.

Also See: JK Brinson- Father of Savannah James; Where is he?

Mickey Guyton has a son with her Boyfriend

Mickey Guyton is married to her boyfriend Grant Savoy, who is a lawyer by profession. The couple started dating in 2010 and were engaged in November 2016. They wedded in a secret ceremony in Kauai, Hawaii in June 2017, where they invited their close friends and relatives.

In August 2020, the couple revealed that they were having a baby. They became parents with their first child, a son named Grayson in February 2021.

Phyllis Ann Roddy’s profession and source of earnings is not available. She reportedly is a housewife and doesn’t have income. However, her husband is an engineer who earns well to live a happy life.

Her daughter Mickey is a popular singer with a net worth of $5 Million in 2022.