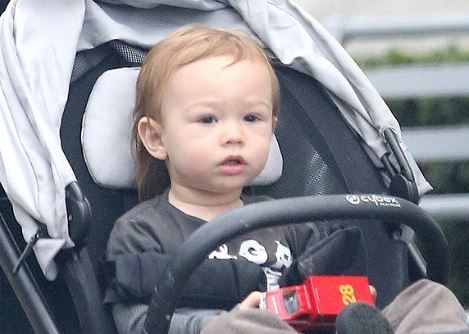 You might not have forgotten Julia Stiles, who entertained people through her romantic comedy 10 Things I Hate About You. She is now the mother of her second child, born earlier in 2022, but who is her first child?

Read the article to know everything about the celebrity child.

His parents reveal the news of his birth only after a month. His mother posted a photo of his tiny hands holding his dad’s thumb on Instagram and wrote:

“Strummer Newcomb Cook, born October 20, 2017. Thanks and ever thanks to the extraordinary Doctors, Nurses and staff at Mount Sinai for helping bring this utter joy into our lives. ❤️✨ ‘Hello, World!’”

Strummer was named after musician Joe Strummer. He is of English, Irish, and Italian descent from his mother’s side, but his father’s ancestry is not available.

His parents revealed in July 2017 that they were expecting their first child, who they named Strummer.

His mother, Julia Stiles, and father, Preston J. Cook, first met on the set of Go With Me (also known as Blackway) in 2015.

Julia was an actress in the movie, while Preston served as a camera assistant.

They soon started dating each other and were engaged on Christmas Eve, 2015 at a private residence in Isla Grande, Colombia.

They tied the wedding knot in September 2017, just a month before the birth of their first child.

Their wedding was quite unexpected, as they tied the knot in presence of other two friends on the beach in Seattle.

Soon after, they became the parents of their first child.

In January 2022, Julia and Preston welcomed their second child.

Strummer Welcomed his Baby Brother with an Art

His mother announced the birth of his brother through an Instagram post sharing a photo of Arlo’s tiny feet. She wrote:

“Welcome to the world, Baby Arlo! ✨ The newest addition to our family, reminding me how infinite love can be. 💖.”

Strummer’s mother also revealed how her first son is taking the birth of his brother. She posted a photo of his art where he had defaced the toilet with a red marker.

Strummer Newcomb Cook’s father Preston J. Cook, is a popular camera assistant who has worked for the movies like The Hunger Games: Catching Fire, Divergent, Ready Player One, etc.

Her parents are Judith Newcomb Stiles and John O’Hara, who are Strummer’s maternal grandparents.

Strummer’s maternal grandmother Judith is a Greenwich Village artist, while his grandfather is a former elementary school teacher.

She is featured as Maisy-May in the upcoming Canadian comedy TV series The Lake, which will release in June 2022.

Julia Stiles has always given importance to raising her children privately. Unfortunately, we don’t have any details about Strummer’s name and age.

She also mentioned that parents should give time to their children and dance with them instead of writing comments or posting photos with captions.

Though we don’t have the proof, Strummer was named after Joe Strummer from The Clash as she mentioned previously that she danced with her baby to that band.