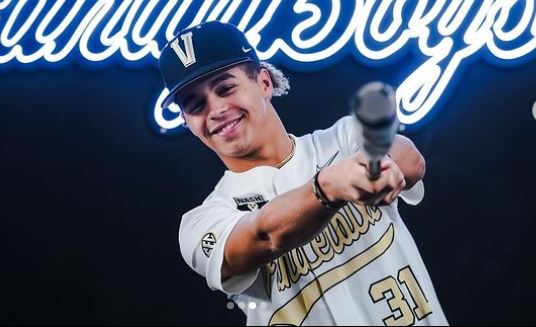 Druw Jones is an American high school baseball outfielder who is committed to play college baseball for Vanderbilt University. He played for the Wesleyan School previously.

Druw is the top MLB Draft prospect for 2022 and is expected to be the no. 1 pick. Know the personal and professional details about the rising baseball star.

He was born to father Andruw Jones and mother Nicole Derick. He also has a sister named Madison and a half-brother Joshua born from his father’s relationship with Mélissa Vaillancourt.

Druw Jones is 6 feet 3 inches tall and weighs 160 lbs. He belongs to a mixed ethnic group as his father is of African-American descent while his mother is Caucasian white.

Druw’s father trained him to play since he was very young. He attended Wesleyan School in Peachtree Corners, Georgia where he played for the school team and was named the Gwinnett Daily Post Baseball Player of the Year in his junior year.

After high school, he committed to Vanderbilt University. He is a top prospect for the MLB Draft 2022.

Druw parents Andruw and Nicole are probably college sweethearts and might have met in college. After dating for some years, they married in 2002. After a year, they welcomed their first son Druw Jones in November 2003. They also had another daughter Madison in 2005.

Druw’s mother filed for divorce from his father in January 2013. As reported, the couple had a fight on December 25 and Andruw threatened to kill her grabbing her neck.

Nicole and Andruw were married for 10 years. Nicole even demanded joint legal and primary custody of their children, child support, alimony and half of the couple’s property.

After their divorce, Druw’s father dated Mélissa Vaillancourt and also has a son named Joshua.

Salary and Net worth

Jones’ is still a college athlete so, doesn’t earn now. But, after the Draft, he will certainly make huge earnings as he is one of the best players in the Draft.

His father Andruw Jones earned $126,653,500 from his MLB career and has an estimated net worth of around $50 Million. He reportedly made huge money during his playing career.

Druw, who just finished high school, is focused on his career and is preparing for the MLB Draft. He is just 18 and reportedly single at the moment. He hasn’t revealed his relationship status and girlfriend yet.

The former MLB star son is single and unmarried.

Druw Jones has an Instagram account @25.druwjones where he has 96.5k followers. He is already a celebrity at the age of 18 and is projected to be one of the best players in the future.

Also a College Athlete: All about 2022 NBA Draft Prospect Jaden Ivey; Who are his Parents?