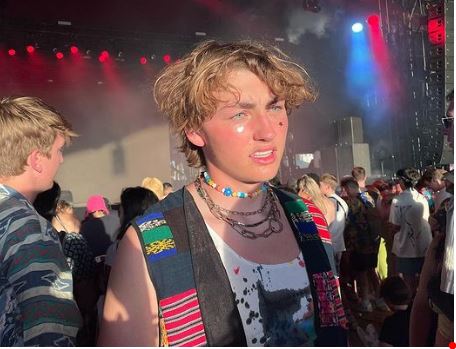 Phoenix List is popular as the younger brother of twin actors Peyton List and Spencer List. Besides, he has appeared in the movies Rabbit Hole (2010), Vegas (2012) and American Viral (2014).

His sister Peyton is an American actress and model who gained fame after portraying as Emma on the Disney Channel series Jessie. Moreover, she has also starred in the spinoff series Bunk’d, Netflix series Cobra Kai etc.

Likewise, his brother Spencer is best known for appearing in the Fox show Fringe. Phoenix has also followed in his siblings’ footsteps and appeared in some movies and TV shows.

When was Phoenix List? Who are his parents? Know all the details about him in this article.

Phoenix is 17 years old now but will soon turn 18 on September 2022. He has two twin siblings named Peyton and Spencer List and both of them are actors.

He holds American nationality. He comes from a mixed ancestry of German, English, Scottish, and French.

The youngest of three, Phoenix has also followed his older siblings’ path into the movie industry.

He made his acting debut in the short comedy movie 8 Easy Steps in 2008. He was also featured as Jared’s son in the short drama film Curious Things in 2010.

Likewise, he starred as Jeffrey in the short film Montauk in 2011 and also portrayed the role of Tim Ludlow, in the first episode of the 2012 TV series Vegas. Furthermore, he starred in the 2014 American TV series Viral.

Short Detail about his Twin Siblings Peyton and Spencer

Peyton and Spencer List are twins born on April 6, 1998. They are the older siblings of Phoenix.

His famous sister Peyton studied at The Carroll School and later attended the New Voices School for Academic and Creative Arts. She graduated from Oak Park High School in 2016.

Peyton initially started her career as a child model and made her acting debut with the soap opera As the World Turns in 2002.

Her breakthrough appearance came in the 2010 movie Remember Me where she starred as Samantha and gained even more fame for her role in The Sorcerer’s Apprentice.

Her popular movie credits include Remember Me, The Sorcerer’s Apprentice, Bereavement, Something Borrowed, The Seventh Dwarf, The Outcasts, etc. Likewise, she has also appeared in TV series like Bunk’d, Light as a Feather, Cobra Kai, etc.

Phoenix is a high school kid who could have a girlfriend as he is a rising celebrity. He is liked by many people and mostly girls for his dashing personality.

He might be dating his girlfriend secretly but hasn’t disclosed anything yet.

The rising American actor has appeared in short roles in several movies and TV series. Having starred in some movies, he might have earned some money.

However, his net worth hasn’t been disclosed yet.

His popular sister Peyton List has earned a net worth of $7 Million. She makes huge money from her movies and TV roles. Besides, she also gets paid well for her modelling jobs.

Likewise. his brother Spencer has an estimated net worth of $1.5 Million.