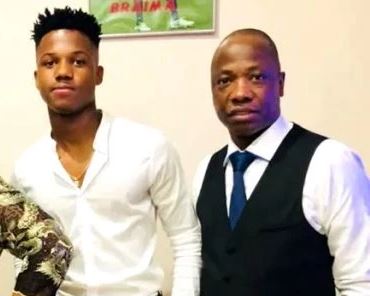 Bori Fati is the father of Barcelona’s forward player and a member of Spain’s national team, Ansu Fati. He is married to his wife Lurdes Fati.

Ansu Fati is 19 years old boy who started his professional football career at the age of 10. He is one of the promising young talents with a bright future.

Let’s read the article till the end to know more about Bori Fati including his childhood, personal life, professional life, family, and many more.

Bori was born and raised in Guinea-Bissau. Growing up he had to face lots of hardship in his life because he comes from a very poor family.

We have no information about Bori’s actual date of birth but we can assume that he is in his forties.

Bori played football for some teams in the lower leagues after moving to Portugal. Then, he moved to Marinaleda, a small town located near Seville, that was offering work to immigrants.

After struggling in Marinaleda, he met the mayor Juan Manuel Sánchez Gordillo and found a job as a driver. He then settled in the nearby town of Herrera, where he raised his kids.

He is a proud father and a loving husband.

Bori Fati walked down the aisle with his soulmate, Lurdes Fati in the late 1990s in Bissau, Guinea-Bissau.

His wife’s profession is still unknown but she reportedly is a housemaker. Bori and Ludres struggled a lot after the marriage and moved from place to place in search of jobs.

They finally came to Spain and settled there with their children.

The couple are married for more than 2 decades now. They seem to be in so much love.

Seeing their relationship, Bori and Lurdes might have dated for some time before getting married. They have raised a wonderful family together.

Who are Lurdes Fati’s Children?

Lurdes and Bori’s first child is Braima Fati was born after a year of their marriage in around 1998.

They became parents of their second child Ansu Fati on October 31, 2002. Their other kids are named Miguel Fati, Djuco Fati, and Djenaba Fati.

The oldest child Braima Fati is also a footballer who currently plays for Biggleswade United in the ninth tier of English football according to a report in the Daily Mail.

Likewise, their other son, Miguel is also a footballer who plays for Barcelona’s under-8 team.

On the other hand, the details about their daughters are not available on the Internet.

How rich is Bori Fati?

Despite being in the public eye for so long, Bori has managed to keep his private life out of the media’s reach.

So, we have no calculation of his net worth. It seems as if the ex-footballer also manages his son’s businesses, which might be a promising career for Bori.

On the other hand, his son, Ansu is worth $5.2 million as of 2022. His major source of income is his football career, brand endorsements, etc.

Some facts about Bori Fati