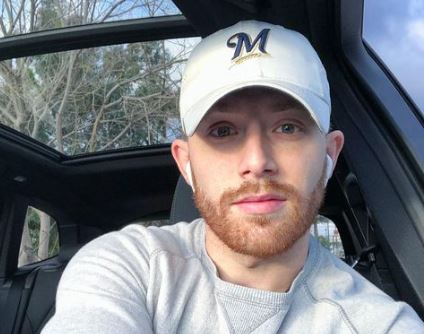 James Benrud is a Youtuber who is popular as the husband of American singer and Youtuber Madilyn Bailey. Benrud and his wife Madilyn together run a Youtube channel that has over 118k subscribers.

He was born on 30 November 1991 in the Wisconsin, United States of America. He is 30 years old and holds an American nationality.

How is his Married Life with Madilyn Bailey?

James Benrud and Madilyn first met each other through Madilyn’s sister who is a photographer.

They soon became close and started talking to each other. However, Madilyn had not any intention of dating him.

They soon fell in love and also wrote a song titled “Are We Falling In Love” explaining her feeling.

James and Madilyn were engaged after some time and got married on 14 March 2014. The couple had a traditional marriage ceremony held in Maidlyn’s birthplace in Wisconsin.

Who is Madilyn Bailey?

James’ wife Madilyn is a singer, songwriter, and Youtuber who has released several albums, songs, and EPs. She is also popular on Youtube with 9.22 Million subscribers.

She was born to Heidi Wold and Gerg Wold on 2 September 1992 in Boyceville, Wisconsin, United States.

She started writing songs at the age of 7 and also played music. She grew up learning music and her father was her first teacher.

“I grew up with music all around me in my childhood. My dad played guitar. When I was eight years old my dad actually sat me down and taught me how to write a song.”

She was also a member of the marching back of Boyceville High School. Before starting her music career, she worked as a certified nursing assistant.

Madilyn has Dyslexia, also known as a reading disorder. She also talked about it in an interview and said:

I think my dyslexia has a lot to do with my instant connection to music. I didn’t really have to try with music. It just made sense to me. Because getting good grades took so much effort, when I found something that felt effortless, I ran with it,

The singer auditioned for the 16th season of America’s Got Talent where she sang her original song. She was qualified for the next round with 4 yess.

She sang a cover of David Guetta and Sia’s “Titanium”. In her next round, she performed her original song “Red Ribbon” but got eliminated.

James Benrud’s main source of income is his Youtube channel through which he might be earning some money.

However, the exact figure of his earnings and net worth is not available.

His wife Madilyn has an estimated net worth of $6 Million which she earned from her album sales, Youtube channel, and various other sources.

James Benrud is on Instagram as @jimbosliceoflife where he has 17.4k followers. He often flaunts his beautiful life with his wife on his Instagram.

He recently shared two photos with his spouse on Instagram and captioned:

It’s pretty great finding that one person you want to annoy for the rest of your life.

Madilyn also shares photos of beautiful moments with her husband on her Instagram @madilynbaileyamong her 872K followers. Moreover, the singer also has a Tiktok account where she has 3.1 Million followers.