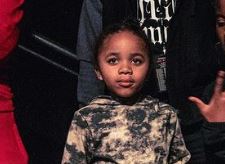 Based in Lousiana, his father’s debut studio album, Islah reached no 2 on the US Billboard 200 chart.

His parents are Kevin Gates and Dreka Gates, and has an older sister named Islah Koren Gates who is 8 years old.

Khaza is Moroccan and Puerto Rican from his father’s side but his mother’s descent is not known.

Meaning of his Name

As a whole, His name means ‘a perfect gift’ treasure from god and he has been the same to his parents.

His sister’s name Islah means “reform” or “improvement” in Arabic

When did his Parents Marry?

Her parents Kevin and Dreka first met in college in the early 2000s. They began their relationship during that time and had a secret relationship for around 14 years.

Kevin and Dreka got married on October 17, 2015,  in Baton Rouge, Louisiana, the United States. The details about their wedding is not available.

They already were the parents of two kids before their marriage. Their first daughter Islah Koren Gates was born on November 30, 2012.

They were blessed with their son Khaza Kamil Gates on May 10, 2014.

Moreover, her father reportedly has other kids from his past affair. In an interview in 2013, Kevin revealed that he has children with a unanimous woman and said:

“I got some children. I’m real real close with them. I lay in the bed with them, hold them, love on them. It really doesn’t make sense to say [how many kids I have]. Not in a bad way, but it’s not like the public will ever get to see my children, and if they do see them, they aren’t going to know they’re mine.”

In 2019, Khaza’s parents hinted that they were expecting their third child but it was jus a rumor as the couple hasn’t welcomed their third.

Have Kevin Gates and Dreka split?

Several cheating rumors of Dreka have come up recently and sources claim that the couple is on the verge of getting a divorce.

She reportedly cheated on Kevin Gates with her personal trainer recently in 2022.

They no longer live together and Dreka has been staying with her partner in a farm.

The Louisiana-based rapper, who is releasing his new album, has hinted about the cheating incident on his new track.

Took the blame in interviews and made it look like I was trippin’/ Made the ‘Dreka’ song, lied to the world while trying to protect her image.”

In the song, he further indicated that she was cheating him with the personal trainer.

“Personal trainer invaded my personal space / Deep down inside it killed me.”

Kevin has also deleted all of his Insta posts after the incident.

Dreka’s trainer is a gay woman. Many fans and followers have commented on her Instagram post asking about her alleged affair with Dreka.

Khaza’s father Kevin is an American rapper who is known for his album Islah. His other albums are I’m Him and Khaza.

He was born Kevin Jerome Gilyard on February 5, 1986. A native of Morocco, his father is of African-American ancestry while his mother is a Puerto Rican.

His parents separated when he was very young and was raised by his mother. His father died from the complications of AIDS when he was 14.

Khaza Kamil’s mother is an Instagram star and a co-founder and CEO of Bread Winners’ Association. She is also her husband’s manager.