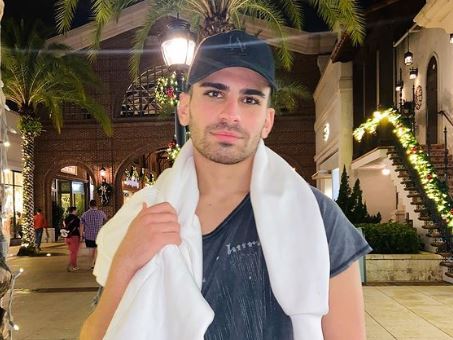 Biagio Lazaric is a social media star and Youtuber who runs a self-titled Youtube channel where he shares reaction videos and pranks mostly with his girlfriend Kyla Yesenosky.

Yesenosky, like her boyfriend Lazaric, is a social media star and Youtuber.

Lazaric and his girlfriend Kyla Yesenosky are in an open relationship. They probably started dating in 2020 as the pair first introduced each other on their Instagram.

The couple frequently appears together on the videos and Biogio mostly shoots prank videos with his girlfriend.

They seem to have a good bond and are enjoying their life together doing pranks. In videos, we can see them very happy and enjoying each other’s company.

Kyla is like a best friend to him as they love each other’s company. On her birthday in 2020, he called her ‘best friend’ and wished her writing:

Happy Birthday to this beautiful woman, my best friend, and my love! Thanks for coming into my life. No words are amazing enough to describe how happy you make me feel! I love you bean

How old is Biagio Lazaric?

The Youtuber was born on February 10, 1999, in Yardley, Pennsylvania. He holds an American nationality and is of Caucasian white ethnicity.

Lazaric is 23 years old as of June 2022 but his girlfriend’s age is not disclosed.

Kyla celebrates her birthday on October 18 and is probably in her early 20s.

How tall is he?

Biagio stands at the height of 5 feet 8 inches approximately and his body weight could be around 60 kg.

He has a perfectly maintained body and also has a tattoo on his right leg under the knee.

Career and Net worth

Biagio Lazaric, who dropped out of the university, makes most of his earnings from his Youtube channel. He has around 623k subscribers on his channel and frequently posts reacting videos.

He reportedly earns $50 thousand annually alone from his Youtube channel.

The social media star has invested in the clothing business and also sells clothes to his followers.

“Merchandise is important to them because it allows them to feel much more connected to me, I’m always thinking and designing new merchandise concepts to sell to my followers in order to make it as personalized as possible.”

Moreover, he also has a TikTok profile with more than 340k followers. He might be making some money from Tiktok and Instagram too.

The exact figure is not available, but Lazaric earns $100,00 approximately in a year from his various sources. He also works with various brands and companies and helps them in publicity, promotion and exposure

A popular figure on Instagram, Biagio is on the platform with the handle @biagiolazaric, where he has more than 76k followers.

His girlfriend Kyla is followed by around 200k fans on her account @kylayesenosky.

He is also on Tiktok as @biagiolazaric and is followed by 341.3K Followers. His girlfriend also has an account @kylayese where she has 691.9K Followers.